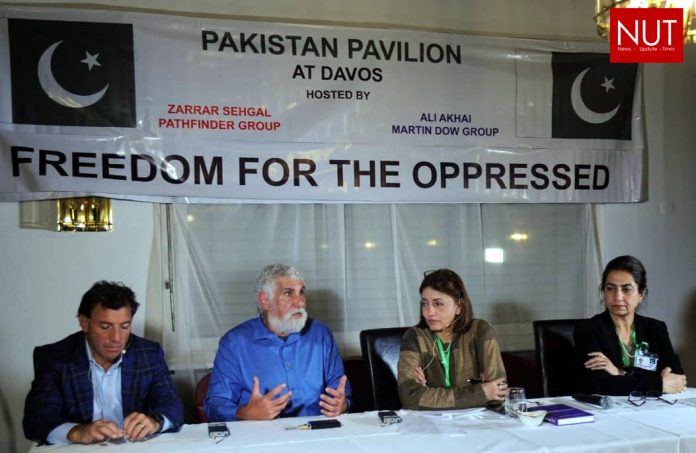 Pakistan (Muhammad Yasir) A global policy beyond prejudice to deal with the issues being faced by the oppressed people is the need of the hour, stated international affairs experts during a panel discussion. The panel discussion ‘Freedom of the Oppressed Classes was hosted by Pathfinder Group of Companies in collaboration with Martin Dow Group at Pakistan Pavilion on the sidelines of the World Economic Forum in Davos. The session was presided over and moderated by Dr. Huma Baqai, Pakistan’s eminent educationist and senior vice chairman of the Karachi Council on Foreign Relations (KCFR) while Dr Marc H. Siegel, President & CEO Siegel Associates, and Mr John DeBlasio, Chairman Continuity Global Solutions shared their views on this occasion. Prominent Pakistani lawyer Anwar Mansoor Khan could not attend the discussion due to some unavoidable reasons, however, his speech was read out to the audience by Dr. Samia Khan Babar. Initiating the discussion, Dr. Huma elaborated on the term oppressed saying that victims of each crisis around the globe were considered oppressed and undoubtedly, aggression was one of the major reasons behind a majority of these crises. She also described poverty not only as a major source of oppression but also as a crisis itself. On this occasion, Dr. Samia Khan Babar read out the speech of Anwar Mansoor Khan titled ‘Oppression Leads to Breach of Peace and Security’ in which he shed light on the legal status of global humanitarian crises including Kashmir and Ukraine. “To save a succeeding generation from the wars was the main motivation for the creation of United Nations but in the recent past we witnessed one of the permanent members having veto power launch aggression against Ukraine,” Mansoor said. He added, “The war of Yemen where Saudi Arabia with the blessings of powerful caused miseries and the destruction in Libya, Iraq, Kuwait, and Afghanistan were some examples of the aggression causing a breach of the world peace while it seemed that the members of the UN subscribed to such wars.” Referring to the Kashmir dispute, Anwar Mansoor Khan slammed the United Nations and its members, saying that the main purpose of the United Nations was to give the oppressed nations access to their rights but it turned out to be a distant dream. Mansoor said that the UN Security Council in 1948 passed a resolution 47/1948 declaring Jammu & Kashmir as a disputed territory between Pakistan and India and the responsibility was given to India to arrange the plebiscite under a representative of the UN Secretary-General with full authority enabling the people of Jammu & Kashmir to decide their fate. Anwar Mansoor questioned the silence of the United Nations on the flagrant violation of the resolution by India, saying that the UN Security Council had been reminded of the implementation of the resolution several times since 1948, but it could not be implemented due to Indian bigotry. Anwar Mansoor said that the UN was directly responsible for the ongoing atrocities against the people of Jammu & Kashmir. Referring to the UN Charter, Anwar Mansoor said that Chapter VII of the Charter indicates strict action against the invading countries but it has been observed that the permanent members of the UN Security Council blackmail the world body through their veto power. He said that the United Nations should immediately find a solution to the Kashmir issue, otherwise the escalating tensions between the two nuclear-armed neighbors could lead not only to a breach of peace but also to a major crisis in the wake of the war. While shedding the light on the situation in Kashmir, Dr. Huma Baqai said that Kashmir was a key dispute between the two nuclear states and its resolution was crucial given severe tensions in the region. Dr. Huma said that after the declaration of Jammu and Kashmir as an Indian territory under Article 370, efforts were being made to change the proportion of the population there and Hindus were being resettled in the valley which was a serious violation of international law. Huma Baqai said that resolution to the Kashmir dispute was in the best interest of both Pakistan and India as both the countries were spending more on military powers than they could afford in this regard. “As well-known Indian writer Arundhati Roy said, it’s not the Kashmiris who need freedom from India, it’s India that needs freedom from Kashmir,” Baqai said in her closing statement. Referring to the Russia-Ukraine war, Dr. Huma Baqai said that the Pakistanis could better understand the plight of the people of Ukraine because they had been seeing a practical example of the Afghan crisis in our neighborhood for the last 40 years. On this occasion, Dr. Marc Siegel, an internationally renowned human rights activist, said that the dream of emancipation of the oppressed classes did not seem to be based on reality.