CREATIVITY UNDER LOCKDOWN Something of significance occurred on 21st May, the World Day for Cultural Diversity for Dialogue and Development, which went unnoticed in Pakistan but managed to receive international accolade. UNESCO and MEADOWS international NGO (Mediterranean Endevors Advancing Development of Widespread Sustainability) led by the dynamic international artist and Olympian gold medalist, geologist and conservationist from Beirut Lena Kelekian, launched an artistic endeavor to highlight cultural diversity through unity, especially in the times of the current pandemic.

UNESCO and MEADOWS opened a virtual exhibition of artists from over 120 countries, including Pakistan, who contributed generously with their art to bring attention to the current crisis. Among these artists is Khadija Khosa. As a Public Policy graduate from King’s College London, and a lecturer in the same field, she says this project appealed to both the artist and policy-maker in her, who wants to bridge the gap between the need for awareness and better management of the current crisis.

Khadija says representing Pakistan at such prestigious platforms was a moment of pride for her; and to be able to partake in the global effort to raise hope and awareness against COVID19 is something that was deeply fulfilling. Her artwork was born out of the ancient tradition of Indo-Persian Miniature, painted with watercolour on Wasli and then photoshopped on to a digital ‘mask’. 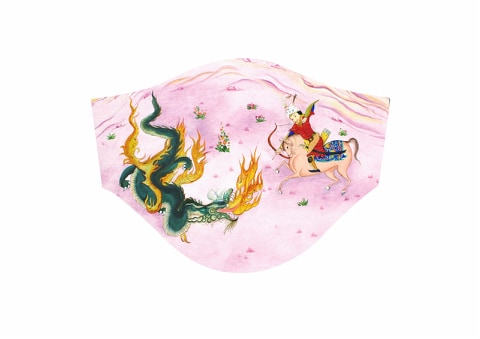 The work was titled “Fighting the Demon”, and the idea behind the image represents humanity fighting COVID together. The goal was to turn masks – which are now being seen as symbols of fear and confinement into emblems of hope, sustainability, introspection and resilience. Khadija believes that in the current times where most people are enclosed in their homes and the atmosphere is that of borderline despair, art is a colourful and convenient way to reach out to people. When most galleries around the globe are closed, UNESCO and MEADOWS have reached out to people online through digital art – also being termed ‘resiliart’ as a tool to promote resilience through art. This also sheds light on the significance of our environment and how to better take care of it – which can be achieved successfully by a combined global effort.