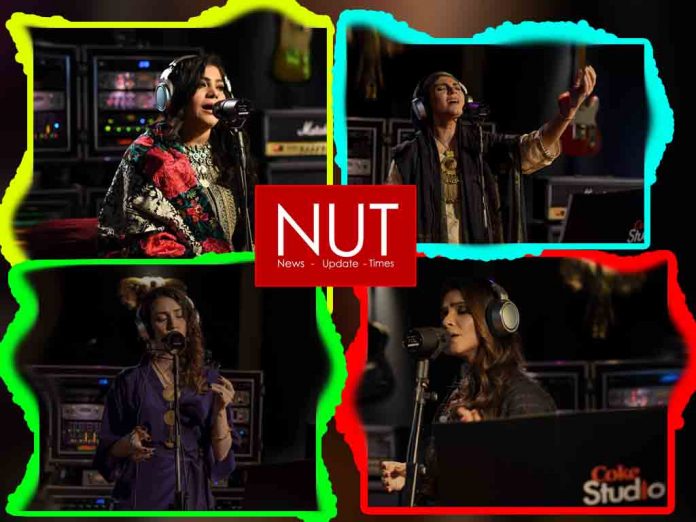 Lahore (Muhammad Yasir) After an entire year of preparations under strict Covid19 SOPs, the Coca-Cola Company proudly announced the airing of the first episode of Coke Studio 2020 on December 4, 2020.

Producer Rohail Hyatt, who is at the helm of the national music platform once again, has ensured that not only will this be a season featuring purely original songs, the focus for this year has been on content and social messaging which includes an all-female anthem called Na Tutteya Ve featuring Meesha Shafi, Fariha Pervez, Sehar Gul Khan, Sanam Marvi, Wajiha Naqvi, and Zara Madani. Interestingly, this will be the first time ever in Coke Studio history that all the female artists of the season will be singing together, although each artist was recorded separately.

The song, which consists of a rap section performed by Meesha Shafi for the first time in her music career, is about how the spirit of a woman is unbreakable. On the song, Shafi says, “Gender equality is a very big topic of discussion throughout the world today and this song talks about equality from the woman’s perspective.”

Wajiha Naqvi added that, “It is important to respect women – after all it is these women who play an equally critical role in society. I see this song as a prayer calling upon unity among women; a prayer that we always stay together and support one another.”

In addition to this, CS debutant, Mehdi Maloof will be performing Dil Khirki, a song written and composed by the emerging indie artist. The song, with its typical college sing-along feel is about opening your heart to the world regardless of life’s circumstances. In accepting one’s circumstances, one is able to submit to fate which ultimately results in a greater understanding of both life, and the self.

Talking about the song, Maloof explains that, “Unless you are lost, you can never truly find yourself.”

Dil Khirki can be viewed at: https://youtu.be/8QIaBikvGoQ

In Jaag Rahi, Fariha Pervez sings about suffering sleepless nights, longing to be united with her Beloved (Almighty). Ali Noor’s voice responds to this longing by explaining that he suffers the same predicament and that she is not forgotten. Jaag Rahi, which is a contemporary take on the classical thumri, is the third song featured in the first episode.

Pervez says that this song has elements of Ishq-e-Majazi (romantic/worldly love) and Ishq-e-Haqiqi (love for God Almighty), “However, even when I was singing I noticed that the more dominant feeling was towards Ishq-e-Haqiqi. I don’t think there is a greater love than that for the Creator.”

Coke Studio 2020 was administered under a careful management and maintenance of COVID-19 SOPs which resulted in both singers and musicians being recorded separately. Despite these challenges, Coke Studio was committed to releasing a season as an opportunity to keep hope alive amidst difficult times.

Given the extraordinary circumstances under which this year’s season has been produced, it will be deliberately referred to as Coke Studio 2020 and not Coke Studio Season 13. The core values of the Coke Studio platform have always been to explore, experiment and share the unique music of Pakistan and the sub-continent with the rest of the world. Hence, with this evolving discovery of the Pakistani identity also continues the journey of Coke Studio and its music.

For information and updates, log onto www.cokestudio.com.pk , https://www.youtube.com/user/CokeStudioPk or www.facebook.com/cokestudio and look for the hashtag #CokeStudio2020 to follow the Coke Studio journey.

The amazingly talented Shuja Haider shared this demo with me when we were planning to work together for Season 13 right before the Covid Pandemic. It was Dil Tutteya Ve at that time. I really liked the track and couldn’t stop humming the melody. When Season 2020 came about, I asked him if I could use the track for the season and he was kind enough to say yes.

From the onset, it bothered me that the song was setting up the ‘female’ as someone who breaks down easily. In my years of experience, I’ve observed the opposite. I find females to be very strong and resilient despite them having to put up with the rules of a male dominated world. The apparent ‘weakness’ is a misgiving that comes from the misunderstanding about their emotional sensitivity. Sensitivity is not weakness, it’s a strength and Na Tutteya Ve is about this perspective.

I originally approached Meesha Shafi for this song but we both decided that this message would be better delivered if it came from all the female artists of the season and she graciously gave up her solo song for the common good! Great gesture. One version of the demo sounded very R&B and that’s where the idea for the rap part came from. Subsequently, the sound became more traditional but we retained the rap part since it was so powerful.

If you speak Punjabi, you’ll readily understand the message in the song but if you don’t, do check out the translation. The very talented Asim Raza has revised Shuja Haider’s version but credit for this song goes to both of them.

And to all us guys out there- I hope we get the message. Sensitivity is NOT a sign of weakness!

It’s not every day that one comes across an artist like Mehdi Maloof. When I was first introduced to his work I was a bit confused because he was so unusual – but his music grew on me very quickly. I loved his ability to pen lyrics in such an honest way. Clearly he was communicating to a very different audience who seem to appreciate a matter-of-fact truth about the world around them. If you haven’t heard his songs, I recommend you check them out. My favourites are: https://youtu.be/DuBEzqmW4Ls and https://youtu.be/juNVWkhB1Go

The interesting thing about Dil Khirki is that it was originally written as a very dark/suicidal song but changed into its current version when we instead decided to celebrate all the things that seem bad or negative to us. One can’t live their life only wanting and rejoicing about happy moments. It’s all the other moments that need to be accepted and celebrated as well. Dil Khirki is about this acceptance. It is about surrendering to fate. Quite a powerful message in such a simple song. I really enjoy the simplicity of Mehdi’s writing. On a side note, when I started the recording of Mehdi’s vocals, I noticed that he was moving his hand in the air as if he was playing a guitar and I realised that he is missing holding a guitar while singing. So we gave him a guitar to hold and strum but it’s not really plugged in. He was fine after that!

I hope the song grows on you as it has grown on everyone who has been involved with it. Mehdi Maloof will amuse and enlighten us for years to come. I look forward to more of his work!

The very talented Fariha Parvez shared some ideas with me and Jaag Rahi was one of them. A long time back Ustad Naseeruddin Saami sang a thumri for me and this one reminded me of it. I remember I had always felt that semi-classical music would go well in an acoustic guitar setting so this was my opportunity to put the idea to test. Thus began a back and forth process of sharing demos with Fariha. She would record her vocals on her phone and I’d arrange the track with these. Soon enough I realized I wanted to share the perspective of the male response to the woman’s anguish of separation. So many times when we don’t hear from a loved one, we tend to feel neglected or insecure – only because we don’t hear the other side of the story. So a sad song (or feeling) can turn positive only if we understand that what makes us sad is nothing but our own insecurity. If we overcome this insecurity, the pain of separation still remains but it turns into a bittersweet feeling.

Spiritual messages also refer to this separation between the Creator and the created and how the longing of union rages within us – even if we are unaware of this in our everyday lives. The word ‘pardes’, which means abroad in the everyday sense, in fact refers to the place of origin and the afterlife in spiritual terms. In this context, this song talks about the longing of union between the opposing divine male and female attributes. There’s a contemporary part to the thumri which is sung by Ali Noor. Conceptually it borrows from a famous spiritual Folklore of Sassi Punnun to give this song an added dimension and meaning. I love the way Fariha and Ali have expressed themselves in this song. They have truly sung from their hearts! 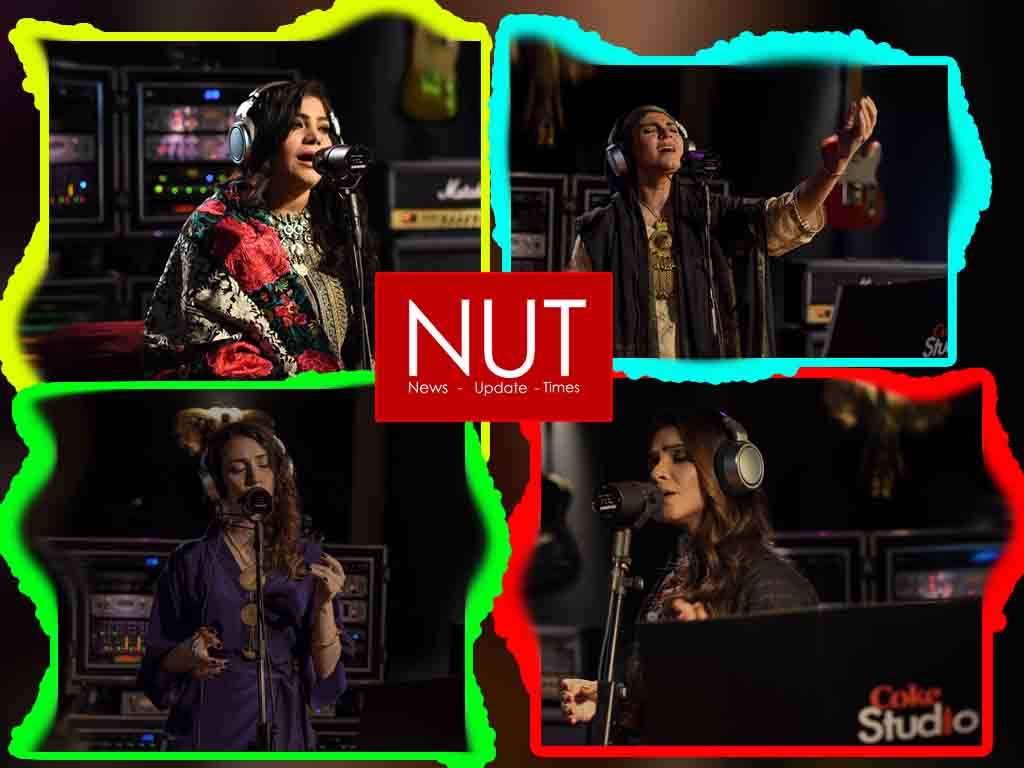