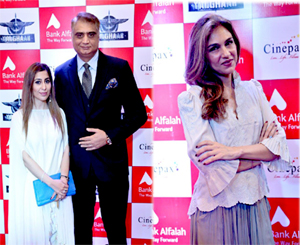 The star studded event was attended by the cast and crew of the film, Bank Alfalah executives, other showbiz personalities and socialites of the city. The audience appreciated the film and the role of the armed forces in protecting the country from terrorism, the key message of “Yalghaar”.

Yalghaar is a Pakistani war-epic film directed by Dr. Hassan Rana. The film, sponsored by Bank Alfalah, is inspired by the story of the Pakistan Army’s Swat Operation. The film explores the lives of army officers and soldiers involved, and how they are affected at a personal level by the ongoing operation. The film stars Shaan in the lead role, along with Humayun Saeed, Adnan Siddiqui, Bilal Ashraf, Ayub Khosa, Sana Bucha, Aleeze Nasser, Armeena Khan, and Ayesha Omer.

The movie, with innovative production techniques and superior visual effects was seen as a game changer in Pakistan’s cinema industry. It is the most expensive Pakistani movie to date and sports one of the biggest star casts in a Pakistani film. Yalghaar was launched simultaneously in 22 countries and has been a major box office hit. It stands as the second biggest opening of 2017, after Fast 8.

Speaking at the screening, Bank Alfalah’s CEO, Atif Bajwa reiterated the Bank’s support to Pakistan’s film industry. “Bank Alfalah has been supporting the revival of the Pakistani film industry. We are pleased with the completion and success of Yalghaar and hope to collaborate on many such projects.” Bank Alfalah has lent strong support to film, fashion and innovation through their Rising Talent platform. Many new fashion designers, film makers like Adnan Sarwar and the students behind Pakistan’s first formula electric car have come out of the Rising Talent program.

Zubab Rana Makes her singing debut on Kashmir Beats with her...