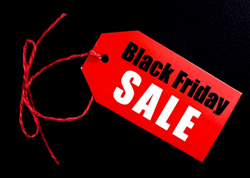 LAHORE-The Black Friday shopping rush created a mess on the main roads of posh areas like Gulberg where some arteries had to be closed to control the increasing traffic chaos.

Though a western tradition, which, following Thanksgiving – fourth Thursday of November – is considered a day opening the Christmas shopping season but it seems to have arrived in Pakistan with a bang.

Almost all the big outlets offered discounts and the people, especially women, rushed to the fashion outlets in huge numbers, creating traffic jams on the roads. However, to some people it was a day of joy and shopping at reduced rates. For others, it was struggle to reach home after office hours while it was a nerve-racking experience for police.

“We are not here to reject or celebrate any western or eastern tradition. We are here to shop at reduced rates. Who cares about the cause if one can enjoy the result?” said Muhammad Ajmal, a shopper at the Liberty Market.

“One cannot object to celebrations or rate cuts but one can certainly object to road muddles,” complains Saira Malik who claimed to have stayed stuck on an artery for a long time.

She said if the outlets had offered rate cuts and were expecting this kind of rush they should have coordinated with the traffic police or the police should have forgotten issuing tickets for an evening to concentrate on traffic.

“How one can manage this madness? It started growing in the afternoon and then went out of control by evening. Every traffic warden is working at his designated point. But rush, along with rash driving, has made things difficult to manage,” said a traffic warden on a Gulberg road who wished not to be named.