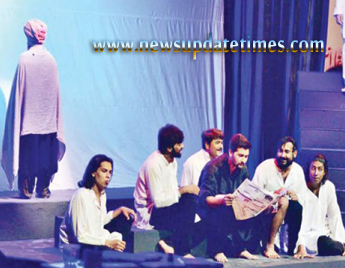 LAHORE – Ajoka’s ‘Revisiting Partition’  festival continued for the second day with a powerful adaptation of Intezar Hussain short story  ‘Shehr-i-Afsos’.  The play depicts the nightmarish world of three guilt ridden scepters who have lived through the bloodied times of both 1947 and 1971.The festival opened with the performance of critically acclaimed play “Kaun hai yeh Gustakh” on 10th October which enthralled the audience completely.Written by Ajoka’s Shahid Nadeem, and directed by Madeeha Gauhar the play focuses on Saadat Hassan Manto’s life struggle after his migration to Pakistan in 1948.  Enactments of his short stories Siyah  ashiye, Khol do, Thanda Gosht & Toba Tek Singh depict the horrors of the violence which accompanied Partition.In her inaugural speech Ajoka’s artistic director Madeeha Gauhar said that painful events occurred at the time of Partition inspired authors to write compelling stories on both sides of border. This festival is presenting selected stories through which audience can witness the human suffering due to the forced mass migration.The festival will conclude with a performance of ‘Anhi Maai da Sufna’ on 12th October, Shahid Nadeem’s play inspired by true stories of the generation dislocated and tormented by the Partition. The play has been directed by prominent Kolkata- based theatre director Usha Ganguly. Ajoka’s Executive Director Shahid Nadeem said that the Partition Festival has been a great success and will be followed by other plays marking the 70th anniversary of independence.