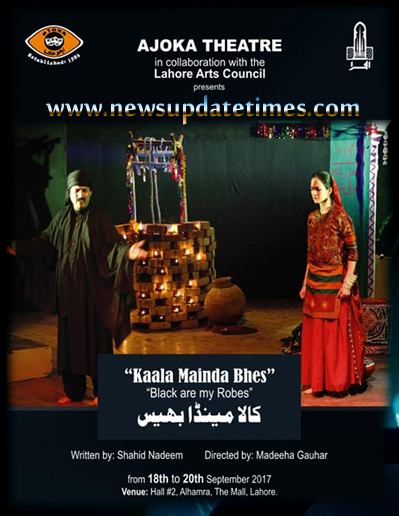 Lahore (Qasim Ali)  –  The ancient form of theatre “swaang” comes to life with modern story of common people with the opening of Ajoka’s new play “Kala Mainda Bhes” on 18 September. Written by Shahid Nadeem and directed by Madeeha Gauhar, “Kala Mainda Bhes” is a story of the struggle for survival and their rights placed in the Thar Desert, where a local feudal Pir controls the sources of water and the destiny of the masses. The play is inspired by a real incident in a Sind village where a woman was exchanged with an ox.

According to Madeeha Gauhar, the director of the play and also Artistic Director of Ajoka Theatre, “the play is not just a tale of woe and misery, but is also a tribute to the resilience and determination of the common people and is presented in the colourful and entertaining style of Swaang theatre, the most ancient form of theatre in Punjab. It also celebrates the rich and dynamic culture of South Punjab with dazzling costumes and delightful songs.

The Play is being presented in collaboration with the Lahore Arts Council and will continue till Wednesday 20th of the September.