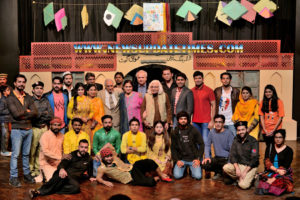 Ajoka Theatre has expressed deep shock and sorrow at the passing away of Pran Nevile, a noted scholar and peace-builder, who breathed his last in Delhi on 11 October at the age of 95.  In a press release, Ajoka  said Pran Nevile was one of the most prominent voice for peace and understanding between India and Pakistan and was a frequent visitor to Pakistan, where he attended Ajoka performances as well as spoke at events organized by Oxford University Press, Government College University and Faiz Festival. He was born in Lahore and studies at Government College and always felt closer to his native city and alma mater as compared to his adopted country. His book “Lahore, a Sentimental Journey”  has been hugely popular on both sides of the border and several editions of the book have been published. He regularly held cultural events on Faiz, Manto, Sehgal and Noor Jahan and recently produced a documentary on the similarities between Indian and Pakistani cinema. At the age of 95, he was still mentally alert and was working on a new book.

Ajoka Executive Director Shahid Nadeem said that Pran Nevile was planning to come to Lahore to attend Faiz Festival session on Madeeha Gauhar, whom he called his adopted daughter. In August myself and Nirvaan went to Delhi to attend a memorial session on Madeeha, which Pran sahib  attended despite his illness and made a very tribute to Madeeha’s contribution to peace and theatre. He always hosted us in Delhi and we were perhaps the last Pakistanis  to enjoy his hospitality. He will always be remembered for  his love for Lahore and his role as a cultural bridge between the two countries.  We all would love to grow old like Pran Nevile, living to the full till the last moment.”