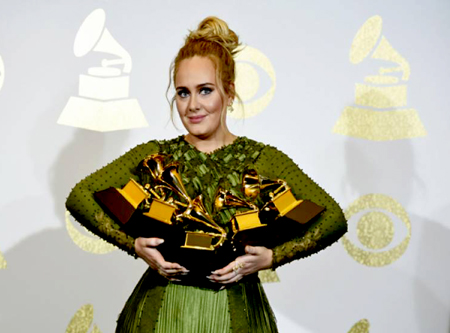 Web Desk – Adele has hit back at trolls who said she looked like Princess Fiona from Shrek at last month’s Grammy Awards. At the ceremony Adele won five awards, making her now a 15-time Grammy winner and she also performed an emotional tribute to the late George Michael.

However her success wasn’t enough to stop some online making cruel jokes and claiming her choice of a green Givenchy Couture gown made her look like Shrek’s Princess Fiona, who is voiced by Cameron Diaz in the animated movies.

“Before the Grammys I had this dress right, I wore this green dress, everyone said I looked like Fiona from Shrek,” Adele told the audience during her gig in Perth, Australia, according to The Sun.

“I don’t care. It was Givenchy Couture, they can say what they want,” she continued. “I worked out. Obviously I’m a large lady and I like eating food very much, but I was working out twice a day to fit into that Givenchy dress because it was quite tight.”

But while laughing the singer then added: “I was running a very long time to get fit for this but it never worked.”  Adele is currently on the third leg of her Adele Live tour, which takes in Perth, Sydney, Brisbane, Adelaide, Melbourne and Auckland, New Zealand