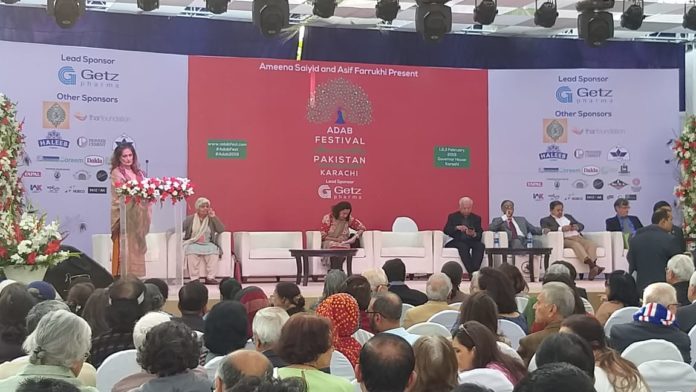 The first three-day ‘Adab Festival Pakistan’ opened at the Sindh Governor’s House on Friday amid the presence of a large number of writers, poets, intellectuals and book lovers. Ameena Saiyid and Asif Farrukhi, who founded the Karachi Literature Festival (KLF) about ten years ago and are now co-founders of the Adab Festival. The festival will continue till February 3 and will feature various sessions on different topics and will be attended by some of the most prominent literary figures of the country.
House, Karachi.

The day started with a session “A conversation with Seyyed Vali Nasr” that was moderated by Salim Raza. In another session, Sayed Amjad Hussain talked on the ‘Partition of India seen through the prism of literature’ and ‘Does risqué poetry have a place in Urdu literature?’ This session was moderated by Syed Nomanul Haq where it was discussed that while some western societies have allowed the public expression of risque poetry, it remains out of bound in most cultures even though it continues to thrive and be passed on orally in all cultures/languages.

In the session ‘Conversation with Amar Jaleel’, Noorul, Huda Shah had a very interesting discussion along with Shah Muhammad Pirzado who moderated the session. In a parallel session, Sibtain Naqvi had an intriguing talk with Irshad Abdul Kadir on his book “Prodigal & Deriabad Chronicals while in the session on ‘Kuliyat-e-Suroor’, panelists Iftikhar Arif, Hoori Noorani viewed & discussed video clips of ‘Baarabankvi’ with the moderator Inam Nadeem.

At the lunch of Javed Jabbar’s “what is Pakistaniat”, Nadya Chishty Mujahid had a wonderful discussion with author on the topic of this being possibly the first-ever book to attempt a numerical identification of the 41 constituent elements ( 30 positive, 11 negative ) that shape the unique national identity of the Pakistani people.

On the issue of ‘the forgotten history of women’s travel writing in Urdu’, Daniel Majchrowicz discussed his research on the history of the Urdu safarnama, with a focus on his soon-to-be-published study of travel writing by women in Urdu and Punjabi. The travel account hardly existed in Urdu before the mid-nineteenth century – why did it suddenly appear, and why and when did women begin to take up the genre themselves? This talk provided an introduction to this fascinating but forgotten field, with ample quotations from Urdu’s earliest women travel authors themselves. The session was moderated by Dr. Yaqoob Bangash.

At the launch of General Fida Hussain Malik’s “Balochistan: A Conflict of Narratives” Zobaida Jalal, Tariq Khosa, and Javed Jabbar and an interesting discussion with the author. The session was moderated by Omayr Saiyid. In the much talked about session “Socio Economic Development Under CPEC” Ishrat Husain, Zahid Husain, Fatemeh Aman discussed core economic issues with the moderator Vaqar Ahmed.

A talk by aftab Nabi was a crowd puller that shed light on colonial Rule in Sindh from 1843 to 1947 with a focus on Hur insurgency of 1941-46. The events leading to the imposition of Martial Law of 1942-43 and the repression unleashed during that martial law period. The panel included Mehtab Rashdi,  Zaituna Umar, Yaqoob Bangash and the session was moderated by Masood Lohar.

In the session “Who’s afraid of Umera Ahmad?” it was discussed that that literature and the people related to it have done us a great service by expelling us from their ranks. We have become closer to the common people if it is true that literature has been proven the guiding torch during difficult times of a nation’s history, then in 21st-century Pakistan, this role will be realized by the works of “popular fiction writers,” not by those of elite artists (adīb). This LUMS student-led panel (Hamad Abdullah Nazar, Mahnoor Nadeem, and Muhammad Umar Habib) contemplated on what this means for Pakistani readers and consumers of fiction, the possible dangers that these novels engender, and the condition of Pakistani literature. The session was moderated by Dr Maryam Wasif Khan.

At the book launch of Peezada Salman’s first collection of Urdu poems “Waqt”, Syed Nomanul Haq and Iftikhar Arif had an intriguing discussion with the author. In the parallel session ‘Is life worth living? Finding hope in Pakistan’, Dr Murad Moosa and  Dr Ayesha Mian discussed the details with moderator Zarrar Khuhro. Zambeel dramatic readings presented ‘Safar Kahani’, an adaptation from ‘Reserve Seat’ by Intizar Husain and ‘Aik Shauhar ki Khaatir’ by Ismat Chughtai. It was performed by Asma Mundrawala, Fawad Khan, Shama Askari. At the book launch of Osama Siddiqui’s “Snuffing out the moon”, Muneeza Shamsie and Maniza Naqvi had a discussion with the author.

In the session on Rendering Karachi on the page: HM Naqvi was in conversation with Marvi Mazhar on the selected works of Abdullah the Cossack, which is first launch event for this book. In the session “Shaeri main nayee Eejaad (New sensibility in Urdu poetry), it was discussed that different ethos emerged in Urdu poetry as a new kind of poetry began to appear with Azra Abbas and Afzal Ahmed Syed in the lead and including Tanveer Anjum and other poets. Azra Abbas, Afzal Ahmed Syed and Tanvir Anjum defined and recalled the change as they recited selected poems and conversed with Asif Farrukhi.

In the light mode session “Buss bhai bus ziyada baat nahin chief sahib” Fasi Zaka and Nadeem Farooq Paracha (NFP) did a casual and humorous retrospective of NFP’s career in cultural commentary focusing on urban pop culture and the interplay of TV, film, and music with socio-economic drivers. At the book launch of Tariq Khosa’s “Inconvenient Truths – Pakistan’s Governance Challenges”, Harris Khalique, Niaz Ahmed Siddiki had a detailed discussion with the author. The session was moderated by Huma Baqai.

At the ‘EACPE documentary film screenings and awards’ Khusro Mumtaz, Muqeem Khan had a detailed discussion with the moderator Sibtain Naqvi. In parallel sessions there were book launches of Shazaf Fatima Haider’s ‘A firefly in the dark’, moderated by Afia Aslam and Sabyn Javeri’s ‘Hijabistan’ moderated by Nimra Bucha.

Harris Khalique had an interesting conversation with Mustansar Hussain Tarar. In the session ‘From passive to pro-active: Promoting media literacy in Pakistan it was discussed that the importance for media consumers to develop the critical thinking and analytical skills needed to demand a more responsible, ethical and professional media. Tasneem Ahmar  Javed Jabbar, Zarrar Khuhro, Wusatullah Khan discussed the details with moderator Farieha Aziz.