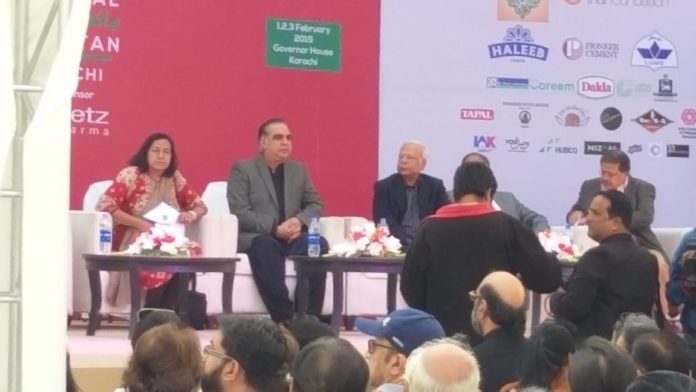 Karachi (Muhammad Yasir)  Governor Sindh, Imran Ismail said that the current government wants to promote literary activities. “Doors of Governor House Sindh, Karachi are open to all literary events and government will extend cooperation in this regard”. He was addressing the inaugural ceremony of the first Adab Festival Pakistan, the 3-day literary event being organized at Sindh Governor House, Karachi.

“Through Adabfest we want to create a new Silk Route through which all the grandeur of our traditions and culture, literature and the arts, expressed through every language in the country, can travel out of obscurity to join the world’s assemblage of cultures and their luscious fruit”. These thoughts were expressed by Ameena Saiyid OBE, SI, Chevalier des Ordres des Arts et des Lettres, Founder and Director Adab Festival Pakistan, at the inaugural ceremony of first Adab Festival Pakistan.

The Adab Fest will be held on 1, 2, 3 February 2019 at the Sindh Governor House Karachi, the historic location where Quaid-e-Azam Mohammad Ali Jinnah took his oath as Governor General on 14 August 1947, and where he lived and died. Entrance is from the main gate on Aiwan e Sadar road. On most days entrance into the Governor House is not allowed except for Sundays when it is open to the public, but for Adab Fest the Governor House is open to the public for from 2 pm to 9 pm on Friday, 1 February, and from 11 am to 9 pm on Saturday and Sunday, 2 and 3 February.

Ameena Saiyid said that we want to celebrate all that has already been achieved, and also to encourage and boost creativity in all its luminous forms. From the bards of Balochistan to the storytellers of Khyber Pakhtunkhwa, the modern-day writers of Islamabad, Lahore and Karachi, from the rich traditions of Punjab and Sind, and the unopened treasure chests of Gilgit Balochistan, we hope to coax more and more manifestations of talent in culture and inspired research. We wish to nurture and promote them. Indeed we would like to create a new Silk Route through which all the grandeur of our traditions and culture, literature and arts, expressed through every language of this country, can travel out of obscurity and insecurity to join the world’s assemblage of cultures and their luscious fruit. 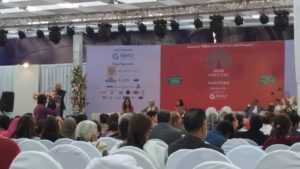 In his inaugural speech, Founder & Director of Adab Fest Asif Farrukhi said that the inauguration ceremony marked the culmination of a long process of tribulations and challenges. He recalled that Ameena Saiyid persisted with the planning in odd places including the cafeteria of the Sindh High Court, “as we were determined to make the best of this opportunity and not to be hectored or pressurized.” It was the pleasure of dealing with books and working with authors and poets which kept alive the spirit. He paid rich tributes to the recently deceased poet Fahmida Riaz and reciting her verses, she remained a guiding spirit”.

On Getz Pharma’s partnership as the Lead Sponsor of AdabFest, CEO Getz Pharma Khalid Mehmood in his speech said “Literature and heritage is the soul of any nation. Ameena sahiba and Asif Sahab have done a great service to this nation by founding these literary festivals. As one of our main CSR areas, we encourage these events because they go a long way in building a more tolerant, well informed and educated country.” 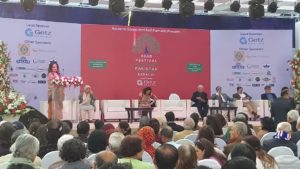 After the launch ceremony, Nasim Zehra’s book “From Kargil to the Coup: Events that shook Pakistan” was launched. The session panel included Hameed Haroon, Najmuddin Shaikh, Gen (R) Waseem Ghazi, Shahid Amin, Ahmed Rashid with the author and was  moderated by Mosharraf Zaidi.

In the background on Supreme Court of Pakistan’s order for all encroachments to be removed from Karachi within 15 days, the session on “Karachi: Encroachments & Demolitions” had a panel that included Faisal Siddiqui, Iftikhar Ali Shallwani, Muhammad Toheed, Noman Ahmad and it was moderated by Rumana Husain.

In the session “The doors of perception: Accessing the unseen in Islamic tradition”, Professors Nur Sobers-Khan, Waleed Ziad, and Francisco Luis engaged in a discussion on ihsan and the esoteric traditions in Islam, touching on topics ranging from aesthetics, the perception of beauty, dream interpretation, Islamic psychology, spiritual travel and wayfaring, divine energy, and meditative practices. 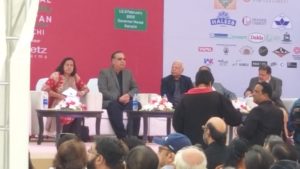 Ma Boli- Language and Learning- An Event by THAAP and Institute...