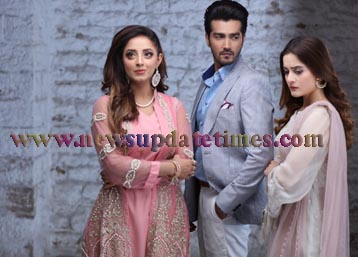 Lahore –  Ghar Titli Ka Par, produced under the banner of 7th Sky Entertainment, one of the largest independent entertainment company in Pakistan spearheaded by Abdullah Kadwani & Asad Qureshi, is all set to go on air in December 2017.

After the signature production, Khaali Haath, the trio Shahzad Sheikh, Aiman Khan and Ali Abbas would be seen again in this show along with Sanam Chaudhry. The show is written by the talented novelist, Samra Bukhari and directed by Mohsin Talat, who has also directed Ghayal, another one of 7th Sky Entertainment’s hit show.

The core idea of the show highlights a prevalent mindset in society that justifies stepping over anyone’s life for personal gains. The story revolves around the lives of Shafaq (Aiman Khan), her loving husband Aazar (Shahzad Sheikh), her caring brother Kamran (Ali Abbas), and her ambitious friend Anji (Sanam Chaudhry).

Ghar Titli Ka Par depicts the suffering of Shafaq — a simple, elegant and innocent girl, as well as the ambition of Anji — a shrewd, conniving and dominating girl, who takes advantage of any situation and exploit it to get what she wants for herself in life. Interestingly, the two girls cross paths, and what eventually transpires is an engaging tale on love, marriage and friendship.

The show is close to reality just like all the other serials produced by the dynamic duo Abdullah Kadwani and Asad Qureshi who have strong production values and a vision to provide quality entertainment. The rest of the cast includes Yashma Gil, Ali Ansari, Humera Bano, Marium Mirza, and Shajeer Uddin.

A new-age revenge thriller to look out for!

Pakistan’s first platform for Storytellers; RINSTRA to be launched in December