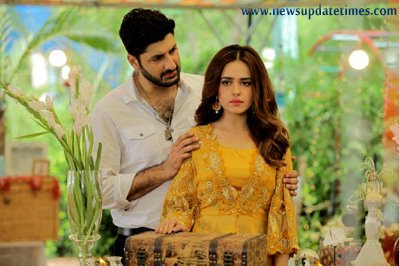 Lahore –  7th Sky Entertainment’s Aik Thi Rania is all set to go on air in October, the drama has Sumbul Iqbal and Syed Jibran as the main leads. Sumbul Iqbal will be returning to screen after a short hiatus as she was last seen in the drama Ghayal. Syed Jibran has already given three back to back hits with Noor-e-Zindagi, Bhooli Bano, and Gairat.It is produced under the banner of 7th Sky Entertainment, one of the largest independent production house in Pakistan spearheaded by Abdullah Kadwani & Asad Qureshi, who have a series of hit shows to their credit including Khaali Haath, Hiddat, Mohabbat Tumse Nafrat Hai . Aik Thi Rania is written by Madiha Shahid, known for her hit drama Digest Writer and directed by Abdullah Badini, who has given hit drama like Naimat. The OST of this show is sung by Ahmed Jahanzeb, who is known for the popular OST of Khuda Aur Mohabbat.