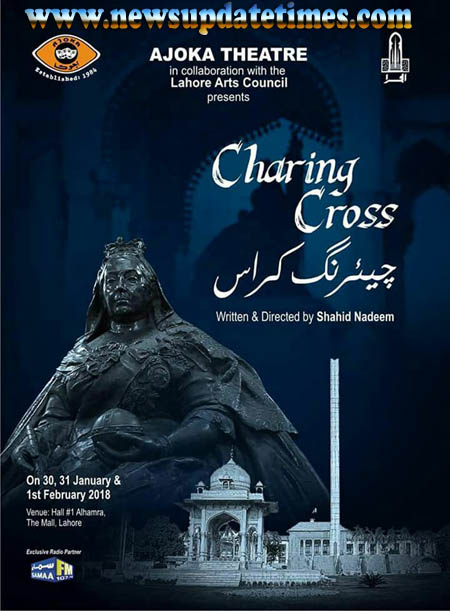 Lahore – Ajoka theatre is welcoming 2018 with a remarkable new play titled “Charing Cross”. A spectacular musical epic primarily based on the major political and social changes on Pakistani landscape with Lahore’s Charing Cross as a witness.

The play is written by Ajoka’s  Shahid Nadeem, The play will be premiered in Alhamra Hall No 1 on 30th of January  and continue till 1 February.  Rehearsals are in full swing  at Ajoka ‘s poffice  Cavalry Ground office. Creative choreographer Wahab Shah has choreographed the dances while Music Director M. Aslam has composed the music. NCA’s Aqeel Kazmi has designed the set.

Talking about the play, Shahid Nadeem said that Charing Cross remains a symbol of British colonial rule at a junction which is considered the heart of the Lahore. This has become a venue where tumultuous events unfold, from of 1970s to the turn of century.  This is a whirl wind  tour  of the ups and downs of Pakistani history, he added.

The play features new talent besides Ajoka’s regular performing troupe.  The newcomers were selected through auditions who are being trained while rehearsing. The play also carries some soul stirring songs and poetry and famous poetry written by literary giants  of the era.

Assistant director Nirvaan Nadeem expressed his pleasure at the introduction of new talent in the production. “Ajoka has trained and harnessed new talent over the years and that is why it is called the nursery of good actors”, he said. actors. In the production. Ajoka believes in peace loving democratic environment and this play is an effort to recollect the memories of various gatherings, processions and rallies associated with the revival of democracy and Mall Road of Lahore.

The play is being presented in collaboration with the Lahore Arts Council and will continue 1st February and will travel to other cities later.

Amar Khan and Imran Ashraf Set the Screen on Fire in...