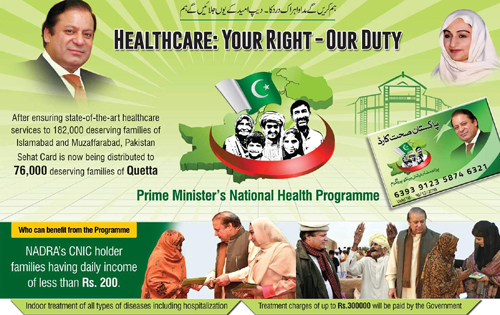 263 poor patients treated within six days of launch of health

have been distributed by Punjab Health Initiative Management

LAHORE:Since the launch of Prime Minister’s health insurance program by Punjab Health Initiative Management Company on 21 st October in district Rahim Yar Khan , 260 patients have seeked consultation from 17 empanelled hospitals. 196 patients have been admitted. 118 patients are currently admitted and 78patients have been discharged after hospitalization. The Punjab Health Initiative Management Company (PHIMC), mandated for execution of the Prime Minister’s National Health Insurance Program (PMNHIP) in the Punjab province, has distributed Pakistan Sehat cards (health insurance cards) among 75% of the identified beneficiary families from Rahim Yar Khan within a month’s time. The total number of beneficaries in Rahim Yar Khan is 515,000. So far 382,000 health cards have been distributed. The programme was launched by the Honorable Prime Minister Muhammad Nawaz Sharif last Friday in District Rahim Yar Khan under Prime Minister’s National Health Insurance Programme (PMNHIP). The main objective of the PMNHIP program is to improve access of the poor population to good quality medical services, through a micro health insurance scheme. For the province of Punjab, the PHMIC will implement the programme. An amount of Rs. 1.5 billion has been allocated for the Health Insurance Initiative in the current budget for PHIMC.

The Punjab Health Initiative Management Company signed a contract with Ministry of National Health Services Regulation and Coordination (MoNHSR&amp;C) in July for implementing the programme in four districts during the first phase of the program. The Department ofSpecialized Healthcare and Medical Education has mandated PHIMC to execute this program in Rahim Yar Khan, Khanewal, Narowal and Sargodha for 1.28 million beneficiary families. Both public and private healthcare facilities having ten plus (10+) beds and provisionally licensed by Punjab Healthcare Commission are entitled for empanelment in the scheme. After enrolment in the scheme, the beneficiary will be eligible to go to any empanelled hospital. The State Life Insurance Corporation of Pakistan has been selected for provision of services in all districts selected for PMNHIP. The payment of premium to the insurance company for the Punjab for the provincial districts is being financed by the Punjab government. A PHIMC spokesperson said that the Company was working at a very fast pace to implement the health insurance scheme in the selected districts in order to provide high quality medical facilities to the poor. The success in Rahim Yar Khan is remarkable while a follow-up survey also hintsthat a higher rate of satisfaction, 96%, among the beneficiaries. In the next phase from January 2017 to June 2017, three more districts will be added, benefitting a population of 1.6 million families and 11.2 million individuals belonging to poor socioeconomic status.The vision is to implement this program in 36 districts of the Punjab by the end of 2018. The Punjab Health Initiative Management Company (PHIMC) was established under Section 42 of the Companies Act, 1984 on 07.02.2015 after approval of the Honorable Chief Minister of Punjab. The main task of the PHIMC is to execute demand side financing schemes including pro-poor health insurance schemes in the Punjab.