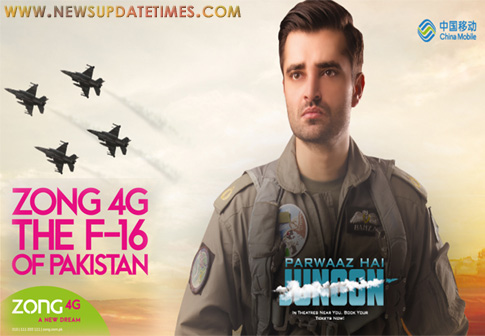 Islamabad (Muhammad Yasir) – Pakistan’s No.1 Data Network Company, Zong 4G has moved to capture the imagination of people of Pakistan with the launch of its upcoming advertisement on country’s 71st Independence Day. Themed “Zong 4G the F-16 of Pakistan,” the one-of-a-kind advertisement allegorically equates the invincible speed of Zong’s fastest 4G internet service with that of F-16, an iconic fighter jet that is known for its unmatched speed, precision and accuracy.

The idea to launch a unique advertisement carrying an extraordinary theme vis-a’-vis August 14 celebrations has been derived by bringing together the creative extracts of an upcoming film about speed; ‘Parwaz Hai Junoon’, a project of Pakistan Air Force (PAF) powered by Zong 4G, which reinforces its technological supremacy and leadership in the 4G domain. The film features prominent stars like Hamza Ali Abbasi and Ahad Raza Mir.

“August 14 is a day that is close to the heart of each and every Pakistani. It reminds us of the sacrifices our forefathers made to secure this great piece of land on the world map called Pakistan under the towering and exemplary leadership of our larger than life leader Quaid-e-Azam Muhammad Ali Jinnah.” said Company Spokesperson on the launch of new Ad.

“Like the rest of the people of Pakistan, team Zong 4G also celebrates Independence Day with a patriotic zeal and zest. Living up to our traditions, this year too, we have come up with a novel idea to celebrate our 71st Independence Day in style. Our new Ad compares and synergizes the fastest speed qualities of F-16 with Zong’s 4G services.” he added.

The new Zong 4G Ad underlines the impressive fact that Zong offers largest 4G coverage with fastest speed at the same superiority level that F-16 has as a ultimate hallmark of speed in fighter aircraft. It merits a mention here that Zong 4G is the largest 4G operator in Pakistan, ensuring seamless data connectivity round-the-clock, throughout the year to its customers.

To watch the Ad you may visit