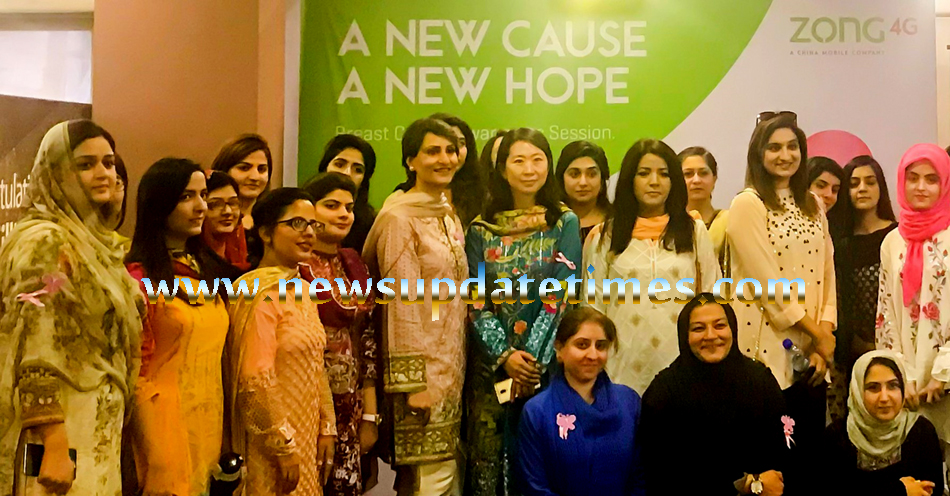 Islamabad –  As part of its sustained Corporate Social Responsibility efforts, Zong 4G, the country’s No.1 4G network, marked Breast Cancer awareness month by holding an awareness drive at its Headquarters. Highlighting the importance of timely diagnosis and early detection, the company held a detailed awareness session for female employees in which participants were briefed on tell-tale symptoms and potential risk factors to help create awareness on this highly important issue.Pakistan currently has the highest incidence of Breast Cancer in Asia where more than 90,000 cases are reported every year. This is mostly attributed to a general lack of awareness where this treatable disease is usually detected at advanced stages where little can be done to turn its course.The awareness drive organized by the company was aimed at addressing this very issue through a series of different initiatives. All female employees which comprise of more than a third of the company head quarter’s workforce took part in an interactive lunch and learn session where they were able to gain greater insight into this illness from a panel of trained Oncologists. Participants were also given the opportunity to hear first-hand accounts from breast cancer survivors, celebrating the strength and resilience shown by these women in the face of adversity.With more than a third of the company’s workforce comprising of women, the activity is a stark reminder of Zong 4G’s commitment to the safety and well-being of its employees as well as the wider community. While the awareness session was exclusively for female participants, Zong 4G’s entire workforce donned pink ribbons for the day in expression of their solidarity with the fight against Breast Cancer. As a socially aware and forward looking company, Zong 4G remains committed to bringing about a transformative and meaningful impact in the country through its wide-ranging initiatives, straddling across a broad range of social issues.