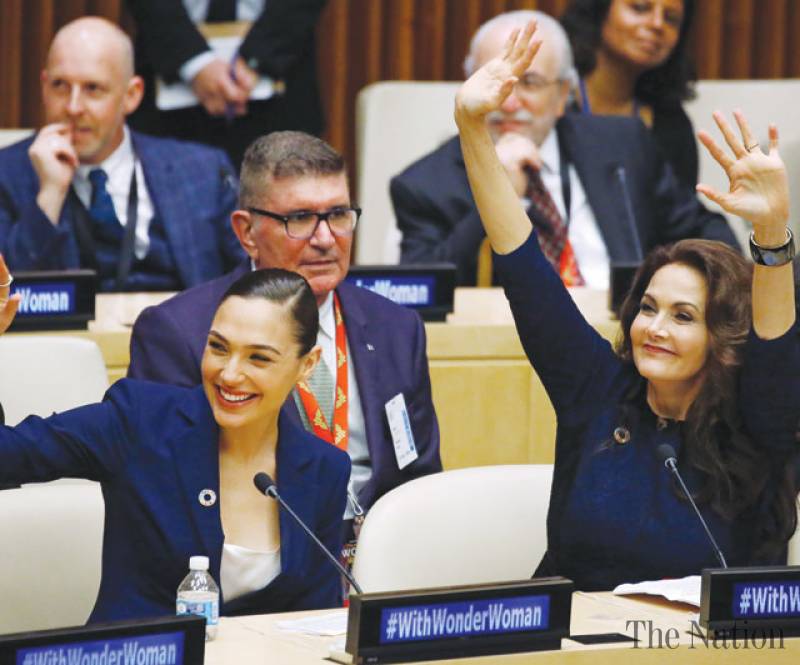 UNITED NATIONS – Wonder Woman, the iconic superhero, has been made a United Nations honourary ambassador for the empowerment of women and girls.

Despite a petition arguing against the appointment, the superhero was controversially chosen as the UN teamed up with DC Entertainment and Warner Bros in an effort to raise awareness of gender equality as part of a new campaign.

Described as a “trailblazer for women’s rights” by DC Entertainment, Wonder Woman first appeared in a comic book in 1941.

Cristina Gallach, UN under-secretary-general for communications and public information, said: “While we have achieved progress towards gender equality, in many parts of the world women and girls continue to suffer discrimination and violence.

“Gender equality is a fundamental human right and a foundation for a peaceful, prosperous and sustainable world.
” Critics hit out at the appointment, calling for real-life heroines to be chosen instead and about 50 UN staff members silently turned their back to the stage during the ceremony in New York.

Shazia Rafi, a Pakistani women’s rights activist and former UN staff member, said it was “a lot of rubbish that you can appoint a cartoon female to represent gender equality in this day and age, even if it is to reach younger women”.

“I’m not against cartoons.
I think cartoons have a value.
But that is not the issue.
”

A petition set up by UN staff members called the appointment “extremely disappointing”.

The petition read: “Although the original creators may have intended Wonder Woman to represent a strong and independent ‘warrior’ woman with a feminist message, the reality is that the character’s current iteration is that white woman of impossible proportions, scantily clad in a shimmery, thigh-baring body suit with an American flag motif and knee high boots -the epitome of a ‘pin-up’ girl.
”

Hollywood Actress Lynda Carter, who played Wonder Woman in the 1970s TV series, acknowledged the protesters during her speech at the ceremony but called on them to “stand up and be counted”.

She added: “It’s okay that not everyone agrees, but get over it and say, ‘What else is new?”‘

The campaign will share positive examples of real-life women and girls who make a difference in everyday life.

Wonder Woman’s strength and fight for justice and peace will help to focus the campaign’s attention in five key areas:

* Speaking out against discrimination and limitations on women and girls;

* Joining forces with others against gender-based violence and abuse;

* Supporting full and effective participation and equal opportunity for women and girls in leadership in all spheres of life – including the workplace;

* Ensuring all women and girls have access to quality learning, and:

* Sharing examples of real life women and girls who are making a difference every day.

“Supporting the United Nations campaign for female empowerment is a weighty responsibility and one that all of us at DC and Warner Bros.
are proud to take on,” declared Diane Nelson, President of DC Entertainment and of Warner Bros.
Consumer Products.

The Eat Festival 2023 to starts today at Beach view Park...