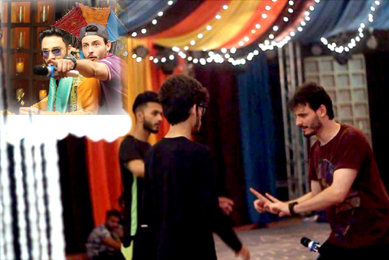 Lahore – Renowned actor and writer Osman Khalid Butt is all set to add another feather in his cap by officially becoming the Director of Choreography for the upcoming movie ‘Parchi’. Prior to this, he has choreographed for theatrical productions (2006 – 2013).

Parchi is produced under the banner of IRK Films, spearheaded by Imran Raza Kazmi and Hareem Farooq, and is a situational comedy that revolves around a group of friends getting entangled in a series of misadventures.

“Choreographing for film has always been a dream of mine – dance is a passion and the scale is massive – and so I immediately said yes when Imran [Kazmi] and Hareem [Farooq] approached me to become the director of choreography for Parchi,” stated Butt.

The movie is set to release in winter this year. An official release date will be announced soon.

Azeem Dar has completed the audio of his new song “Kya...