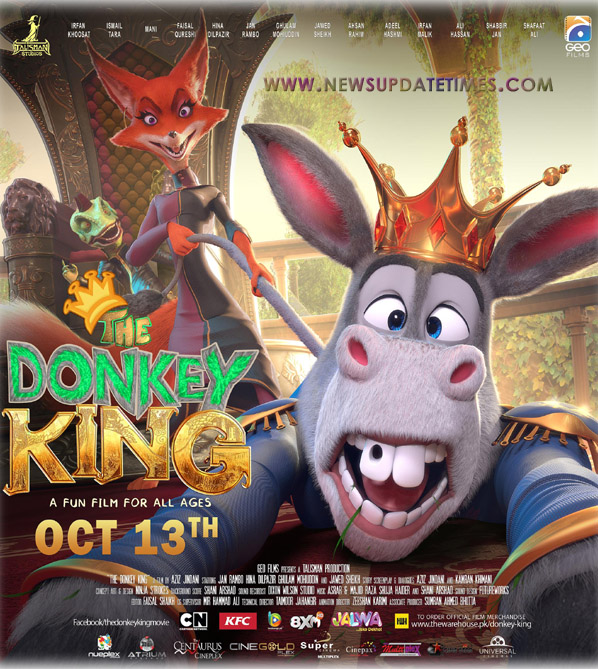 The Donkey King is helmed by Aziz Jindani, the architect of the success of Pakistan’s first and most popular animated super hero series for a leading anti-bacterial soap brand.  A teaser trailer of the film was released about a month ago and fetched over 2 million views across digital platforms with its lead character Mangu achieving near cult status since then as children & children at heart are widely seen imitating the catch phrase from the teaser “My Name is Mangu, Mangu! Jan Mangu! The Washing Machine.”

Riding on the shoulders of a successful teaser, the hopes were only higher from the theatrical trailer and it surely exceeds all expectations. Just under two and half minutes of run time the trailer traces the journey of Mangu from an ordinary world to accidentally becoming the king of Azad Nagar. Only to realize that this was all part of a Machiavellian web set up by the cunning Miss Fitna (Fox). It goes onto set the contest between Mangu and Miss Fitna but keeps the audience yearning for more to discover if Mangu succeeds in rising to be a true king or not? The makers have also capitalized on the pop culture by stitching a gag at the end with reference to meat balls made of donkey meat.  In short, the trailer has all the making of a mass entertainer with humor, action, adventure and song & dance. It surely lives up to its tag line “a fun film for all ages.”

The trailer also unveils the ginormous voice cast of the film with some of the biggest names of the industry including; Jan Rambo, Hina Dilpazir, Javed Sheikh, Ghulam Mohiuddin, Erfan Khoosat, Ismail Tara, Mani, Adeel Hashmi, Irfan Malik & Ali Hassan, Faisal Qureshi, Ahsan Rahim, Shabbir Jan and Shafaat Ali. It is undoubtedly the biggest ensemble coming together for a Pakistani film of any genre.

The trailer also whets the musical appetite by giving a sneak peek into, what appears to be, the title track of the film “Donkey Raja”. The songs are composed by Shuja Haider, Shani Arshad, Asrar & Majid Raza. The background score is composed by Shani Arshad and recorded with live orchestra at the Budapest Film orchestra, a first for any Pakistani film.

The maker, Aziz Jindani, shares his views and states, “The Donkey King is an attempt to leap frog Pakistani films in general and animated films in particular. The film indeed speaks to the children but continuously winks at the adults. We have been deliberate to not get straitjacketed by the stereotype of ‘what an animated film is expected to be’. In just under 105mins of runtime The Donkey King packs in a kaleidoscopic cinematic experience. It will make you laugh, will leave you moist eyes at places, will get you at the edge of your seat with suspense & thrill and above all deliver a meaningful message that will inspire children & children at heart to dream big and discover their full potential.” 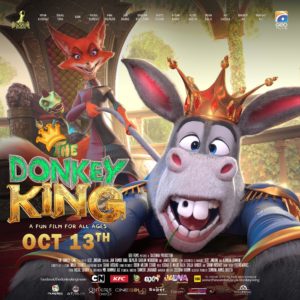 In closing, going by what we see in the trailer, the Donkey King promises to be a film with a big heart, big star cast and big box office potential. We are surely queuing up at the cinemas first day, first show on Oct 13, 2018 when the film is set to rule cinemas across Pakistan.

Likee takes family entertainment to the next level