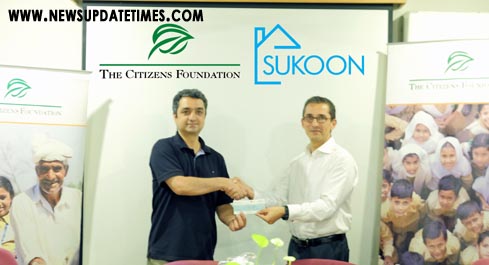 Lahore (Muhammad Yasir) Sukoon Handyman and Errands Pvt. Ltd., ‘Sukoon’ has entered into a strategic alliance with The Citizens Foundation. “We are pleased to announce our work with The Citizens Foundation (TCF) to fulfill our part as a socially responsible organization. Contributing towards the betterment of society through education fulfills our company’s values and purpose. We aim to educate 100,000 TCF students who would otherwise not have access to quality education,” said Omer Ehtisham, Chief Executive Officer, Sukoon.

“We truly respect Sukoon’s brand philosophy of creating a more inclusive society and their belief that quality education forms building blocks of a progressive economy. TCF has been citizens led movement to create equal education opportunities in Pakistan reaching out to the community with limited to no education access,” said Syed Asaad Ayub Ahmad, President & CEO, The Citizens Foundation.

Sukoon has designed a mechanism in its app, whereby the revenue from every third order made by a customer for PKR 1,500 or above puts one child in a TCF school for one month. TCF has evolved a model to deliver quality education in Pakistan’s most neglected rural and slum communities where we find children, especially girls, out of school.

Joining this initiative are prominent personalities including, Anwar Maqsood, Sarwat Gilani, Bilal Ashraf and Junaid Akram. “On behalf of Sukoon, it gives me immense pleasure today to sponsor an entire TCF school for one month to honour the contributions of these celebrities. I would also like to thank Shahbaz Sumar of Basement Films and Farah Sayeed for their help to launch this powerful partnership between Sukoon and TCF,” Omer added.

Pakistan continues to be one of the most charitable societies in the world and the time to digitize participation in positive social change is now. Use ‘TCF’ as a promo code within Sukoon’s app on iOS or Android to do your part.

Talk on Thinking with GHALIB

IBA Karachi signs a tri-party MoU with GEAR and Class of...