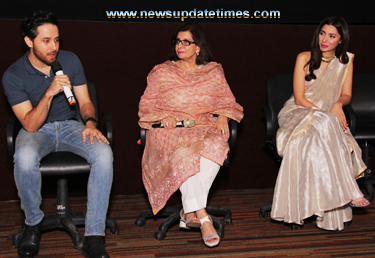 Karachi  –  Verna, the latest offering by Shoaib Mansoor is ready to hit the cinemas on 17th November, 2017 worldwide. The special trailer launch of the film was hosted on 17th October at the Neuplex cinema in Karachi where the leads of the movie, Mahira Khan and Haroon Shahid, were present, and unveiled the trailer to the members of the media for the first time.

Verna is written, produced and directed by Shoaib Mansoor, known for his highly acclaimed films Khuda Ke Liye and Bol. The rest of the cast includes Zarrar Khan, Rasheed Naz and Naimal Khawar.

Speaking at the trailer launch, Mahira Khan stated, “I was overwhelmed to receive such a splendid response to the first teaser and song. The whole team has put a lot of effort in this movie and I hope this movie leaves an impact on people.”

“It’s an honor for me to debut through Shoaib Mansoor’s movie. He has always believed in giving fresh talent a chance and I feel lucky to be a part of this movie. I cannot wait for the movie to be released and get audience’s feedback,” stated Coke Studio sensation, Haroon Shahid, who was present at the trailer launch.

Shoaib Mansoor, the man behind Verna, stated, “Film to me is an art form like poetry. Many people may not agree with me, but I believe in giving art some meaning. All over the world, poetry done with some deeper meanings and philosophy has always lived longer. Whether my films pass for being artistic may rightly be questionable, but they do reflect my beliefs and conscience. Things happening around me bother and hence, I am forced by my inner self to take them on. My films reflects the anger that I feel on social injustice of all forms. So every time I am about to embark on a film it is my anger that controls my thoughts, not the hunger for success and money.”

“That doesn’t mean that I have a thing against films based on pure entertainment. Not at all. By all means they should be made and succeed, and I have all the due respect for their makers. I am happy at the recent success of Punjab Nahi Jaungi and Na Maloom Afraad and wish success to all others that are in line to hit the screen. We need those films to rejuvenate the industry in our country, but we also need some to say something thought provoking. I hope I am one of those.” he further added.

The story of Verna revolves around the lives of a highly educated and beautiful Sara (Mahira Khan) and Aami (Haroon Shahid).  The young couple lives a splendidly happy life until their lives falls apart due to an earth shattering incident in their life. Verna portrays the story of a strong women who doesn’t believe in being a victim, but decides to fight for herself against all odds. It addresses tabooed subjects circling around a woman’s honor and the most commonly held myths and biases around rape.

Ushna says it All in Iffat Omer show