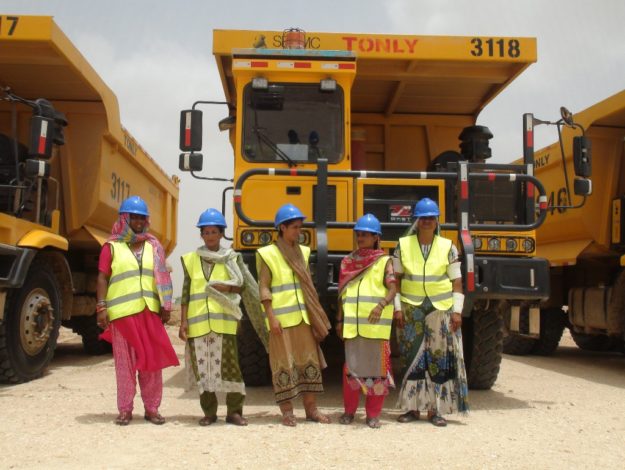 Karachi –  All set to launch Thari Female Dump Truck Driving Program, the Sindh Engro Coal Mining Company (SECMC) on Friday inked a contract with MCCT Associates to train selected Thari women drivers on professional grounds.SECMC, which has Government of Sindh as the major shareholder, recently announced its unique initiative to induct women to drive the Pakistan’s biggest 60-ton dump truck at coal mining site at Thar Coal Block II in district of Tharparkar.The contract was signed by SECMC’s chief executive officer Shamsuddin Ahmad Shaikh and MCCT’s senior consultant, Tanvir Gondal; whereas, SECMC’s Chief Operating Officer, Syed Abul Fazl Rizvi, and Director Human Resource, Kashif Ahmed Soomro were also present on the occasion.As per the contract, starting September 01, 2017, the selected candidates will undergo comprehensive training modules including languages module comprising English, Urdu, and Chinese languages, technical module, and auto-basic module, for one year followed by a regular job with all facilities the company offers to its employees.During the training phase, the candidates will be paid Rs.15000/- as monthly stipend.  The MCCT will deploy women trainers to conduct training at the SECMC’s mine site.Speaking at the occasion, Shaikh said that one of the major components of the SECMC’s coal mining project is to provide livelihood opportunities to the local communities.

“When we started our project in Islamkot, we witnessed that the Thari women were very strong and resilient and did quite arduous tasks. Since SECMC also strives to provide equal job opportunities to men and women, it was realized that a dedicated project to induct women in driving could well work; and the response we received from the Thari women shows that we have stepped ahead in the right direction by employing women in as dump truck drivers,” he said.Mr. Rizvi, COO SECMC expressed that its part of the Thar Coal Mining project’s ‘fundamental principle to empower the people of Thar’.“We wanted the benefits of this game-changing project to be passed on to the indigenous communities who are the primary stakeholders of Thar Coal. And this project to train and induct women as dump truck drivers at coal mine is a SECMC’s commitment towards empowering the women of the area, to help them stand shoulder-to-shoulder with men when it comes to socioeconomic affairs and decision making at community level,” he said.MCCT’s Gondal held it as a ‘great initiative of the SECMC to empower women and generate skilled female human resource in Tharparkar’.He was of the view that they are delighted to be part of this historic initiative and will give best to make this program successful by producing skilled women dump truck drivers competing at par with men in the field.The company received an overwhelming response from the Thari women who came from different areas of the region to be part of the program. Transparent, merit-based scrutiny of applications was followed by interviews and, finally, selection of successful candidates.The program has been envisioned to empower the Thari women and, by doing so, give them their due share in the socioeconomic affairs of the region, culminating in having them hold a say in the decision-making process at family as well community level.