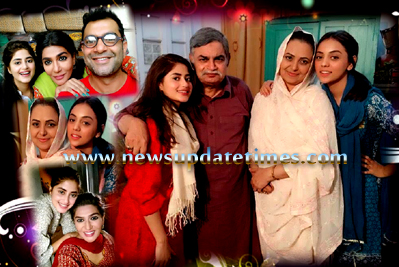 Lahore –  The shoot for drama serial Noor-ul-Ain, produced by IDream Entertainment, has begun and it will be airing on ARY Digital, the most watched Entertainment channel in Pakistan.

The play is being directed by the award-winning director, Sarmad Khoosat, who has directed many hit serials. Produced by Abdullah Seja, Noor-Ul-Ain has penned down by Edison Idrees Masih, writer of Ghairat currently airing on ARY Digital.

Noor-ul-Ain has an ensemble of cast that includes names like Sajal Aly, Imran Abbas, Marina Khan and Iffat Omar – and will be the first time Aly & Abbas have been paired opposite each other.

The story revolves around the two characters played, Khizar (Imran Abbas) and Noor (Sajal Aly), and is a beautiful saga of love and family values. The story is relatable to today’s generation as it revolves around making decisions in haste that you later on regret in life.

The cast is currently shooting in Lahore and will be going on air on ARY Digital in the last quarter of 2017.