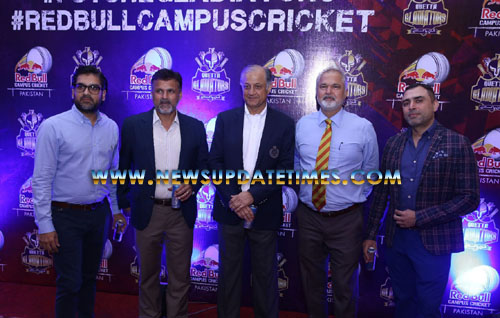 Karachi (Muhammad Yasir) Red Bull Campus Cricket is the only global T20 cricket tournament for university students where campuses from 8 countries contest for national pride and become the world champions.

This edition of Red Bull Campus Cricket Pakistan is on the verge of taking the sports community by storm.  Pakistan Super League (PSL) franchise Quetta Gladiators have joined hands with Red Bull for the upcoming nationwide Campus Cricket Tournament which will be played in eight cities of Pakistan i.e. Karachi, Hyderabad, Quetta, Multan, Lahore, Islamabad, Peshawar and Faisalabad. The national winners will travel to Sri Lanka for the World Finals, competing with 7 other countries for the crown of World Champions of Red Bull Campus Cricket.

Quetta Gladiators owner Nadeem Omar said that he is excited to be partnering in one of the biggest sporting activations in Pakistan. “We’re really exciting to be partnering with Red Bull Campus Cricket and I believe this activation will also allow us to unearth talent at University level,” Nadeem said.

“The players will also have the incentive that they will be monitored by Quetta Gladiators. We plan to induct any outstanding talent from the tourney in our activities. Two of the best players — one from Balochistan and one from rest of the Pakistan — will be included in All Stars Muqabla exhibition match which will be played in Quetta with another PSL franchise in next few months.” The All Stars Muqabla is the property of Gladiators and they played an exhibition match with Islamabad United in Rawalpindi in February before flying out to UAE for PSL season three.

Meanwhile, Nadeem Omar further added that a high performance camp will also be staged for the best 11 players of the Reb Bull Campus Cricket. “Apart from inducting two players in All Stars Muqabla, we will call the top 11 players of Red Bull Campus Cricket for a short high performance camp. We hope that we would be able to get some good talent from Balochistan as well in this initiative,” Nadeem stated.

“Also we endeavor to promote cricket in educational institutions with a hope of bringing in groomed athletes like legendary Imran Khan, Saeed Anwar and others. Sporting abilities should always be the primary qualification for any athlete but little education allow you to become an even better individual.”

In its inception in 2012, Red Bull Campus Cricket was a tournament played just between Asian countries but due to Red Bull’s veracity and after garnering immense praise, more nations came forward to take part into the competition. In succession, the total of 8 countries from all over the globe participates in Red Bull Campus Cricket World Final and has been making it a huge beam of news.

The legendary cricketer, Moin khan has been the mentor for Red Bull Campus Cricket since the beginning and he shares his views on this occasion, “In Pakistan, love and passion for cricket is incomparable to any other sport. Red Bull Campus Cricket is a way to discover raw talents of Pakistan while testing them in different matches at the national level and finally pitching them into international games to polish these talented individuals and bringing the best out of them. It has helped showcase many renowned cricketers. I feel glad to be a part of Red Bull Campus Cricket and wish good luck for its future endeavors.”