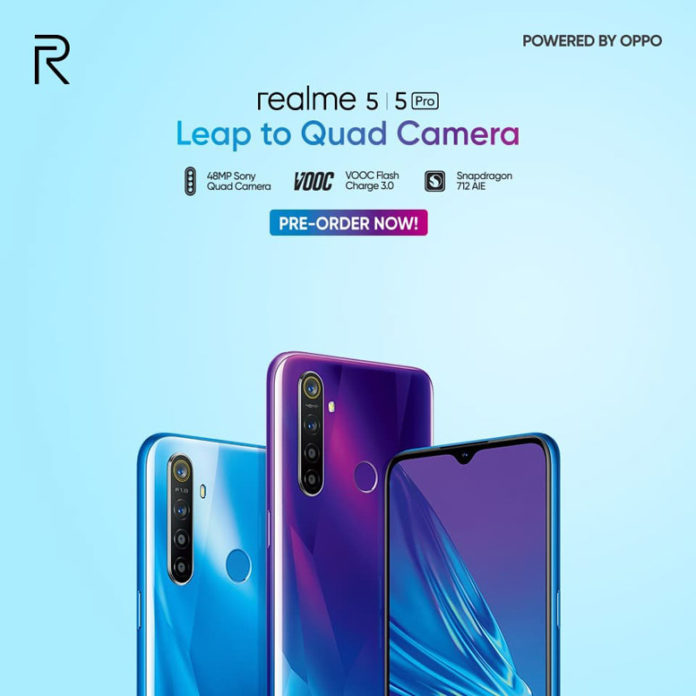 Realme 5 and Realme 5 Pro are all set to launch in Pakistan later this week n 2nd of October, the new budget offerings from the Oppo spin-off brand. The company has confirmed that the Realme 5 Pro is going to be the first smartphone in the segment in Pakistan to sport a quad camera setup with a 48-megapixel main sensor. Realme Pakistan Head of Marketing MR He Shunzi also revealed recently that the new series’ pricing will start from less than PKR. 30,000. Other details along with availability will be announced at the launch event set to begin at 5.00pm Pakistan Time. More about Realme 5 Pro, Realme 5 launch event live stream details, expected specifications were also revealed.

Realme 5 and Realme 5 Pro Pakistan launch event will begin at 5:00 PST. The event will be live streamed on the company’s YouTube channel. At the event, the Realme 5 and Realme 5 Pro will be unveiled, along with their pricing, colour options, and availability details. The phones have been teased on the brands official social media pages regularly, so they should be sold via the brands exclusive e-commerce partner Daraz, apart from offline store all over Pakistan.

The new series will start from less than PKR 30,000, making Realme 5 the first phone in that price segment to pack quad rear cameras. However, the exact pricing or availability details have neither been leaked nor been revealed as of yet.

The new Realme 5 and Realme 5 Pro phones are confirmed to feature a Qualcomm Snapdragon processor, massive 5,000mAh battery, and quad camera setup. The Realme 5 Pro will come with a 48-megapixel Sony IMX586 main sensor, and the secondary sensor will be equipped with an ultra-wide-angle that carries a 119-degree field-of-view. The tertiary sensor will come with a super macro lens sporting a focal length of 4cm, and the fourth sensor will come with a portrait lens. As for the Realme 5, it would reportedly feature a 16-megapixel primary sensor, and the rest of three rear cameras will be identical to its Pro sibling. The rear sensors will be positioned at the top left corner of the back and be aligned vertically. 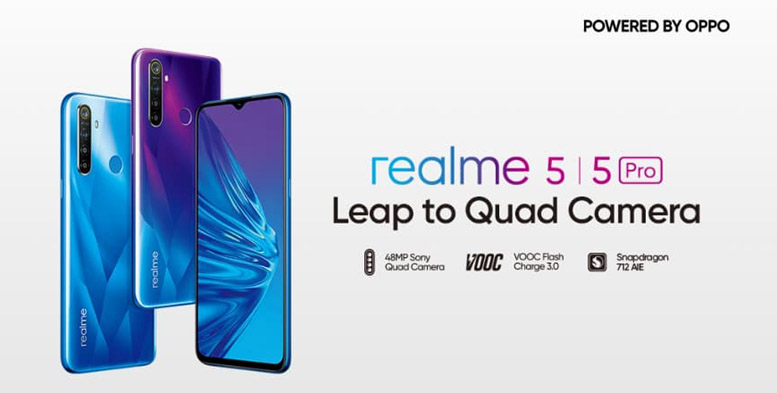 The Realme 5 Pro is powered by the octa-core Qualcomm Snapdragon 710 SoC paired with 8GB of RAM. The phone would be available in 6GB RAM option and offer different internal storage options as well. The Realme 5 will be powered by Snapdragon 665 SoC ticking alongside 4GB of RAM.

The phone will have a glossy back panel and a rear fingerprint sensor. Furthermore, the Realme 5 Pro will come with support for VOOC Flash Charge 3.0 technology, which is claimed to charge 55 percent of the battery in just 30 minutes.

Within just 8 months of its introduction the brand aims to launch multiple products in the upcoming month both in the classic number series as well as higher end models. The aggressively innovative brand has yet again taken a leap and will incorporate quad cameras in all new devices across various price rand in an unprecedented move. 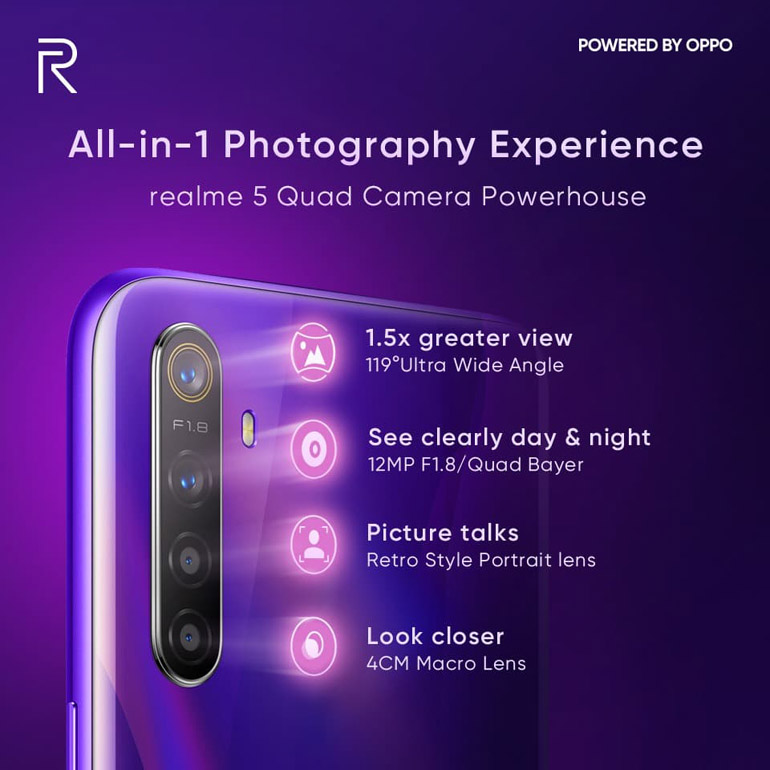 Since its entry into the Pakistani market less than 9 months ago, realme powered by Oppo, has already launched 5 products across different price segments from premium flagships to trendy mid-rangers, all designed particularly for the youth. They are also gearing up for the launch of their next products in the classic realme series in the coming months. realme is proving it has planned an even steeper growth trajectory than its parent company through a targeted focus on the youth.