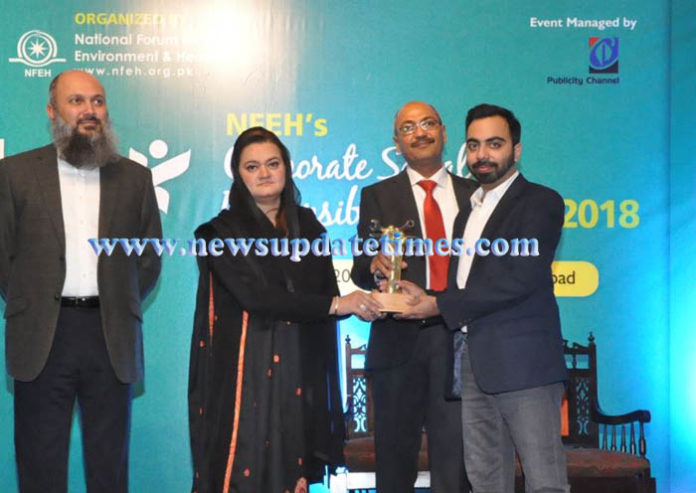 Reckitt Benckiser Pakistan has won two awards at the 10th International CSR Summit 2018, organized by the National Forum for Environment and Health (NFEH). Affiliated with the United Nations Environment Program (UNEP), and supported by the Federal and Provincial Ministries of Environment in Pakistan, NFEH commences each year to appreciate national CSR efforts.

The females of our country deserve to be given opportunities to break out of their stereotypical roles and RB Pakistan’s Project Hope aims to do just that. RB Pakistan’s women empowerment program focuses on transforming women into daring individuals who have taken on the role of entrepreneurs and in many cases, fought for their right to do so. RB Pakistan took the initiative and came forward with a program for women empowerment and also went a step ahead to raise awareness for a cleaner Pakistan where RB works to ensure that the country becomes a safer and healthier place to live with its Hoga Saaf Pakistan initiative.

At this event, RB’s contribution for promoting women empowerment and Hoga Saaf Pakistan was acknowledged. Project Hope through which females in rural Punjab serve as both as educators and micro-franchises for hygiene and health products. The second award was for the Cause Advocacy/Awareness Category for its national campaign, Hoga Saaf Pakistan, which enables the masses to ensure cleanliness and RB Pakistan made an example by first doing it themselves inspiring others to join as well. This marked a great end to a year of successful CSR for RB Pakistan.

“RB Pakistan is proud to be the face of the women empowerment and Hoga Saaf Pakistan initiative to achieve the bright future for the nation. Through these programs we aspire to create awareness about both the issues which are usually found in the rural areas. The idea was instead of urging others to do so; we ourselves take the step forward in doing it and inspired others to join the cause. These award achievements are the proof of the fact that we have achieved what we aspired for and RB will play a major role in CSR activities for providing a safer environment to the masses in the years to come as well.” Said Fahad Ashraf – GM Health, RB Pakistan.

realmeet with realme C21 Gives You A Chance To Meet Your...