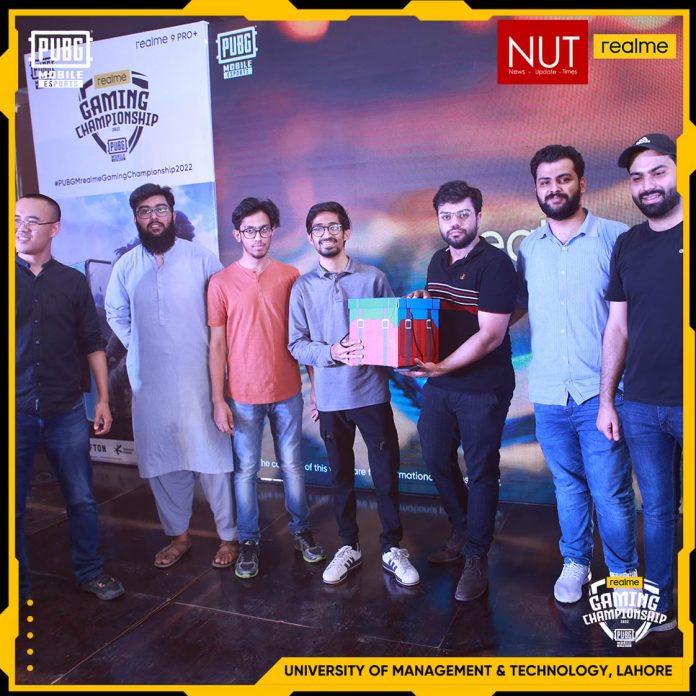 Gearing up for the Grand Finale, top two teams from each university in Lahore and Karachi will battle it out for the ultimate champion of the gaming tournament

After two weeks of clutch moves and chicken dinners, the qualifier and preliminary rounds of the PUBG Mobile realme Gaming Championship 2022 have come to a close. Last week, the action shifted to the vibrant, loud and proud city of Lahore. After the success of the Karachi leg of gameplay, students in Lahore were hyped to get their chance to prove their mettle in the PUBG battleground. PUBG is one of the most played mobile games in Pakistan, gaining many fans thanks to its collaborative gameplay and the challenge of using strategic thinking to make it to the top of the leaderboard.

Students from four selected universities around Lahore competed for a spot in the virtual grand finale last week in a series of tight games in teams of four players. The PUBG Mobile realme Gaming Championship 2022 visited University of Lahore (UoL), University of Management and Technology (UMT), University of Central Punjab (UCP), and University of South Asia (USA) to scope out the rising pool of PUBG talent and find their Lahore fleet of challengers.

The event took place over two days at each university. The first day was reserved for team registration and gaining further information about the competition and the second day was reserved for the main attraction – thrilling rounds of gameplay featuring a clash of brain and brawn. Students at two universities, UCP and UoL, were also lucky enough to meet Ducky Bhai who is the most well-known YouTuber in Pakistan, known for his fun-filled content and love for gaming. Students were able to meet and greet with Ducky in between grueling rounds of gameplay and the winning teams from these universities were handed their prizes by Ducky himself.

The winners of the gameplay at each university were able to win a collection of exciting realme giveaways including t-shirts, key-chains, water bottles, and notebooks and a guaranteed spot in the virtual grand finale.

The top two teams from each of Lahore’s universities are listed below:

University of Management and Technology (UMT)