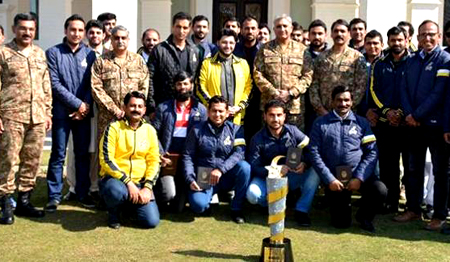 Rawalpindi – Pakistan Super League (PSL) winners Peshawar Zalmi met with Chief of Army Staff (COAS) General Qamar Javed Bajwa, Inter-Services Public Relations said in press release on otherday.
COAS congratulated the team and management on their performance and success. The Army chief appreciated efforts by all the PSL teams and management for brining cricket back to Pakistan. The COAS during the meeting made special mention and conveyed thanks to foreign players and guests who came to Pakistan.
The Army chief said Pakistan was a peace-loving country and cricket was the favourite game and a binding force for the nation. The visiting players and management of Peshawar Zalmi thanks the COAS for support and were pleasantly surprised to know of General Bajwa’s attachment with cricket, his cricketing expertise and knowledge about records of the sport.
They also thanked him for his tips and advise. The players assured COAS that they are soldiers of Pakistan and stand with Pakistan Army in promoting peace and national harmony. The team acknowledged great sacrifices by Pakistan Army for bringing peace and stability in the country.
Chinese ambassador congratulates Zalmi
Lauding the peaceful happening of the Pakistan Super League (PSL) final in Lahore, the ambassador of China in Pakistan, Sun WD Congratulated Peshawar Zalmi owner Javed Afridi on clinching the PSL title.
“The honourable ambassador has not only congratulated Peshawar Zalmi on winning the PSL but also applauded the Prime Minister of Pakistan for mobilising the provincial government and security forces for the successful happening of the PSL final in Lahore”, Javed Afridi said
“The Chinese envoy has hoped that the PSL final would pave the way for the resumption of international events in Pakistan”, Javed Afridi added
Javed Afridi said that bilateral cricketing ties between Pakistan and China were also discussed during the meeting.