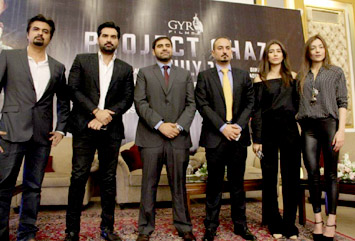 Lahore – GYR Films recently hosted a press conference in Karachi for Pakistan’s first superhero film, Project Ghazi set to release on July 14, 2017, where the trailer of the film was showcased to the members of the media for the first time.

#ProjectGhazi is directed by Nadir H. Shah and produced by Syed Mohammad Ali Raza. The action sci-fi has been completely shot in Pakistan and stars Sheheryar Munawar, Syra Shehroz & Humayun Saeed in pivotal roles. Background score has been composed by Taurees Habib, who has been part of the music team in Hollywood film & television productions like Interstellar, Batman vs Superman, Man of Steel (Superman) to name a few.

“I am honoured to have worked with a team of extremely talented individuals who have put their all in the movie.” shared Syed Mohammad Ali Raza, Producer of the movie.

“It’s a unique genre for Pakistan and could open doors for new and unexplored stories to reach audiences.” said Nadir H. Shah, Director of Project Ghazi.

“Mondelez is committed to supporting talent and we believe that local talent plays a vital role in the development and image building of a nation. We are extremely excited about the rise of new cinema in Pakistan and looking forward to lending our support to such promising initiatives – like Project Ghazi – in the future as well.” Shared  Usman Muneer, MD Mondelez Pakistan

Project Ghazi is being distributed across Pakistan by Distribution Club.