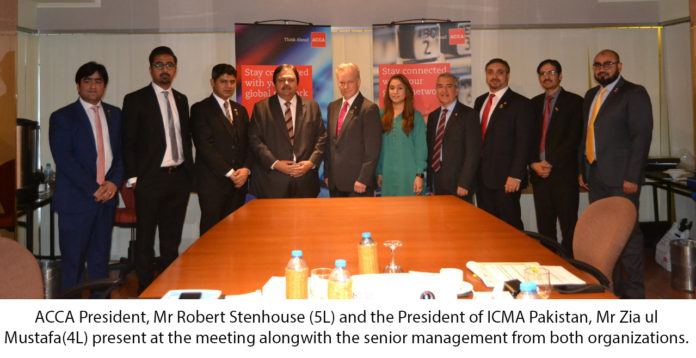 Lahore (Muhammad Yasir) A high level meeting was held in Lahore between ACCA President,Mr Robert Stenhouse and the President of ICMA Pakistan, Mr Zia ul Mustafa to discuss areas of greater collaboration between the two institutions.

Mr Stenhouse stated, ACCA really values the partnership with ICMA Pakistan. ACCA council and executive management is committed to the MOU signed between the two organizations since December 2014 and is looking to grow the collaboration on various new areas of mutual benefit. He invited ICMA Pakistan to contribute to the global series of case studies on public sector reforms which ACCA has launched in collaboration with the International Federation of Accountants (IFAC).

Mr Ziastated, members of both ACCA and ICMA Pakistan have a lot to gain from this partnership. He explained how ICMA Pakistan is playing its role in Pakistan’s economic development and also the statutory privileges and rights earned by their members over a period of 50 years of its existence. Mr Zia appreciated ACCA for playing its role in developing the accounting and finance profession globally and expressed that broader collaboration between both organizations will further add to their national and international contribution.

MrSajjeedAslam said that our collaboration is of a national importance especially at a time when there is greaternational need for good governance, accountability and transparency. He further stressed that professional accountants have a pivotal role to play in the economic development of Pakistan through their contribution to the business community and regulatory regime.

ACCA and ICMA Pakistan have an active MOU since December 2014. This meeting was an important reflection of the shared commitment of the two institutions to collaborate, leading to greater synergy and impact in the future. 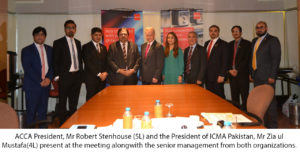