President Dr Arif Alvi has felicitated the nation on the 75th Independence Day. ”During this journey, Pakistan faced many challenges but it successfully overcame them with hard work, sacrifices and the support of the entire nation,” he said in a message on the occasion of Independence Day. 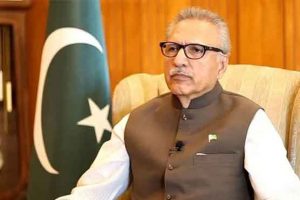 President Dr Arif Alvi said that the tremendous successes achieved by Pakistanis, a brilliant and brave nation, in various fields had made the country distinguished from other nations.

The President said he wished to share in the happiness of his fellow countrymen on the auspicious occasion of celebrating the 74 years of Independence of Pakistan.

“This day reminds us to pay rich tribute to the Father of the Nation, Quaid-e-Azam Muhammad Ali Jinnah, and leaders and workers of the Pakistan Movement who created a separate homeland for the Muslims of the Indian sub-continent,” he added.

The President said the world must appreciate the fact that Pakistan singularly fought a long-drawn war against terrorism and eventually defeated the menace.

“Similarly, the development of nuclear deterrence by Pakistan is a great achievement that has made the country’s defence impregnable,” he said adding that “Not to forget that Pakistan is a host to millions of Afghan refugees for many decades.”

“For this great achievement, I pay homage to doctors and paramedics, religious leaders, media, National Command and Operation Centre, Security Forces and the entire nation whose cooperation made it possible to contain the spread of the COVID-19 virus,” he added.

Prime Minister Imran Khan has congratulated nation on the 75th Independence Day. In his message on the occasion, Prime Minister said that with the universal recognition of government’s policies towards revival of economy, handing of COVID-19 pandemic and environment protection, Pakistan today can stand tall among the comity of nations.

“Pakistan today can stand tall among the comity of nations. Our policies towards reviving the economy, handling the pandemic, and protecting the environment have received universal acclaim,” the Prime Minister said.

“As we hoist our national flag to mark Independence Day, we must reiterate the firm resolve to uphold our national values of unity, faith and discipline as envisioned by Quaid-i-Azam Muhammad Ali Jinnah,” he added.

The Prime Minister said that Pakistan had surmounted monumental challenges during the course of its history to emerge as a united, peaceful and resilient nation.

“Even today, the changing regional dynamics along with some domestic issues continue to test our resolve. Like each time, we will also overcome these obstacles with our characteristic determination and come out stronger as a nation,” he maintained.

The Prime Minister further said that “On this occasion, we should not forget our Kashmiri brothers and sisters in Indian Illegally Occupied Jammu and Kashmir (IIOJK) struggling for their right to self-determination under extremely adverse circumstances marked by illegal Indian occupation and unspeakable repression.”

“Pakistan will continue to extend its full support to the Kashmiris in their just cause. Kashmiris are looking up to the international community to fulfill the promises made to them,” he added.

The Prime Minister said that Pakistan had rendered immense sacrifices and paid a heavy price for instability on its Western border.

“We have consistently stressed that there is no military solution to the conflict in Afghanistan. Pakistan will continue to support a negotiated political settlement for durable peace and stability in Afghanistan,” he added.

The Prime Minister said, “We want peace within and peace without, to pursue our socio-economic agenda. The Naya Pakistan has shifted its focus from geo-politics to geo-economics, with the well-being and welfare of our people as the topmost priority.”

“Our government has undertaken every possible effort for the development and prosperity of Pakistan,” he added.

“This country is undoubtedly a gift of Allah Almighty for us. I once again felicitate all Pakistanis, both inland and overseas, on this auspicious occasion. I urge you to play your part in making Pakistan a proud, prosperous and peaceful nation state,” the Prime Minister maintained.