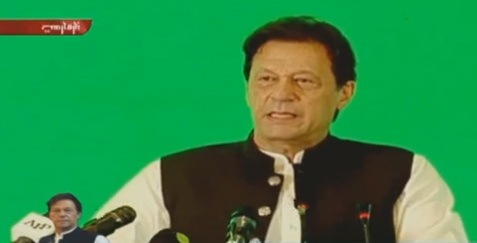 Prime Minister Imran Khan inaugurated his government’s much ambitious Kamyab Pakistan Programme (KPP) under which soft loans worth Rs1.4 trillion will be given to 3.7 million families.

Speaking at the inaugural ceremony in Islamabad, Prime Minister Khan said that such a programme should have been launched 74 years back.

“We made the biggest mistake 74 years ago. We thought we should first collect revenue and then the country would prosper. This was a wrong decision,” he lamented, stressing the need for zeroing in on public welfare to alleviate poverty in the country.

“The Medina state’s was the most successful model in world history,” the prime minister maintained, adding that our country will move forward if it follows the Medina state’s principles of humanity and justice.

He regretted that our system benefits only a handful of elites, noting that inequality and injustice lead to the downfall of societies. Efforts are on to change priorities to uplift the living standards of the downtrodden, he said.

Talking about skyrocketing inflation, PM Khan said the government is well aware of the problems facing the poor due to price hike. He announced that a programme is being launched to provide targeted subsidy on essential commodities like flour, ghee and sugar.