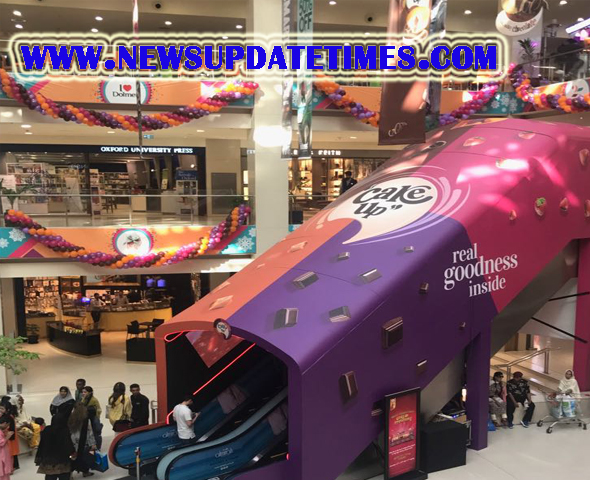 Lahore –  One of the country’s most admired food brands, Peek Freans conducted a first-of-its-kind onground three days activation campaign at Dolmen Mall in Karachi in order to launch their newest addition in the family called “Peek Freans Cake Up,” which comprises of a range of centre-filled cupcakes. This followed similar activities across Lahore and Islamabad in previous weeks.

Capturing the essence of #RealGoodnessInside, two different but very well connected activities were held at Dolmen Mall Clifton to deliver an exciting and fun experience to the visitors. The activation brought together kids and families who were engaged in various interactive games and entertaining exhibits.

The Cake Up Factory, that had already been through three different cities and 4 malls, was set up at the mall, receiving loads of raving responses. The 3D game allowed kids and even their parents to create their own cupcakes by playing through the entire baking process. To take a chapter out of technology, the entire game was completely immersive, with pictures of consumers engaging in mixing, baking and filling having pictures emailed to them as memorabilia.

As part of the first class experiential leg of the activation campaign, The Real Goodness Tunnel added more flavor to the experience by allowing visitors to immerse in a world of strawberry, caramel and chocolate scents as they glided through the tunnel. The consumers walking into the mall were bemused by the giant tunnel-like-structure that had propped up overnight atop the main escalator of the malls’ atrium, taking one on a 23-second journey through the world of Cake Up. Upon exiting the visitors received a free Peek Freans Cake Up to try out the delectable difference. In this way all of their senses of sight, sound, taste and touch were activated at the same time – a process referred to as sensory marketing.

Being one of the leading brands on the block, Peek Freans has launched various exciting and memorable campaigns from time to time. From the instant classic advertising that launched the country’s largest biscuit brand Sooper to the recent innovations of Chocolicious and Jam Delight, English Biscuit Manufacturers Pvt. Ltd. (Makers of Peek Freans in Pakistan) has held successful executions and promotional campaigns including advertising, outdoor, in-store activation as well as experiential, PR and digital elements.

With a purpose to launch their latest brand Peek Freans Cake Up, an announcer campaign was executed earlier to build hype and trial around the product, which was later followed by Pakistan’s most viral TVC – #RealRishtey, with 20million+ views within 20 days on social media only.

The activation concluded at the end of the weekend, making sure that its visitors had a spectacular experience of #RealGoodnessInside the mall with lots of fun and entertainment.