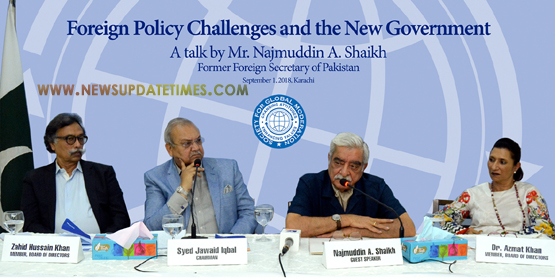 He said this in a Talk on ‘Foreign Policy Challenges and the New Government,’ given on Saturday, September 1, 2018. It was organized by the Society for Global Moderation (SGM) in Karachi.

Mr. Shaikh hoped that the new government in Pakistan will start moving towards a new identity and that it would recognize terrorism as a recurrent theme.

He was of the view that since every country has its own interests to look after, Pakistan must also accept the realities surrounding it and must accept that the Taliban are a reality though it must make sure that it does not become a party to the conflict.

He said he was aware of the fact that for India, it was important to maintain the façade that terrorism was coming from across the border but this still meant that Pakistan must engage with India and hold talks with them. He said he was encouraged by the fact that many countries were willing to mediate in this regard. He was of the view that while New Delhi talks to Srinagar regarding various issues, it must also talk to Islamabad.

Mr. Najamuddin Shaikh believed that Pakistan’s foreign policy was in very competent hands under Shah Mahmood Qureshi who had the ability to steer foreign affairs in a very able manner and that now a new chapter would be opened in Pakistan’s external relations.

The former foreign secretary saw Pakistan as a country with great potential and said that if the new government utilized even 30 per cent of its potential and laid the foundations of a new service structure, it could move forward with prestige and pride.

Co-founders of the Society for Global Moderation, namely Dr. Azmat Khan and Mr. Zahid Hussain Khan, were also present on the occasion.

This Ramadan, Use Easypaisa to Give Your Zakat