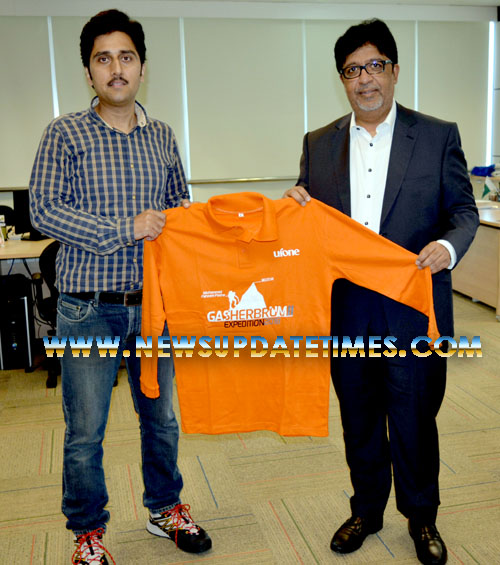 Lahore (Muhammad Yasir)  Pakistani Mountaineer Mohammad Faheem Pasha is all set to scale Gasherbrum II this summer. The 35-year-old climber will start his expedition on 16 June 2018 and is a part of a 13-member team of climbers attempting the “Eight Thousander”.

The team comprises of another Pakistani climber and 11 international climbers from Italy, Hungary, Czech Republic and Poland are taking part in the expedition, which will take over a month to complete. Ufone in its quest to facilitate extraordinary people is supporting Faheem, who is also its employee. It is one of its kind initiative by an employer to support an employee to pursue his passion, meanwhile the Pakistani cellular company remains steadfast in terms of its commitment towards its employees. Faheem hailing from district Rawalakot of Kashmir has been associated with mountaineering from the age of 23 years. “I drive my inspiration from the legendary Italian climber – Reinhold Messner and his romance with Nanga Parbat; the mountain that I first saw in 1994 during my first visit to Northern Areas. I’m quite elated knowing that my employer is supporting this cause and believes in my passion”, he says.

The one and a half months long expedition is expected to be a strenuous task, given the high altitude and extremely harsh climatic conditions. Faheem explains that to acquire this high level of fitness, training is of paramount importance. Syed Zulfiqar Zaidi, Head of Human Resources explains that it is vital for employees to follow their passion as it helps instill a sense of achievement and fulfillment. “As part of the organization’s culture we encourage employees to pursue their dreams and official commitments with equal zeal”, he says.

Gasherbrum II, at 8035 meters above the sea level is the 13th highest mountain in the world and is part of the world’s 14 “Eight Thousanders” (mountains over 8000 meters). Climbers have scaled the mountain 11 times in the past with the first ascent made on 7 July 1956. If successful, Faheem will be the third Pakistani climber to reach the summit.