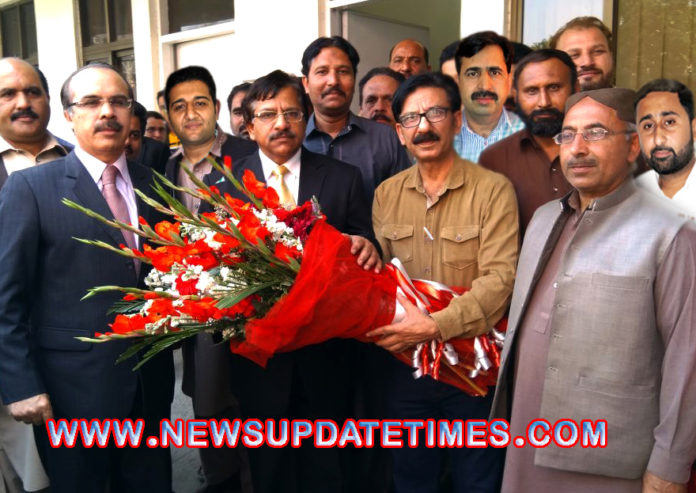 Lahore (Muhammad Yasir) Federal Minister of Religious Affairs Pir Noor-ul-haq Qadri said that Pakistan was a safe country for the minorities and protection of their sacred places were responsibility of the government.

Speaking at the celebrated 549th birth anniversary celebrations of Sri Guru Nanak Devji, he said that opening of the Kartarpur border for Sikh pilgrims proved that the government of Pakistan love and care the minorities while prime minister of Pakistan and Chief of Army Staff (COAS) given their support to such initiatives.

“Pakistan wants peace and brotherhood in the region while India was doing negative propaganda against Pakistan”, he said.

The Pro-Khalistan advocacy group “Sikhs For Justice” (SFJ) is running a secessionist campaign to liberate Punjab from Indian occupation.

“Referendum 2020” banners and “Khalistan” flags with the life size portrait of Shaheed Sant Jarnail Singh Bhindranwale were placed throughout the Nankana Sahib complex. SFJ activists also distributed T-Shirts and Q&A pamphlet on Punjab Independence referendum among the devotees who are visiting Pakistan from more than thirty countries. 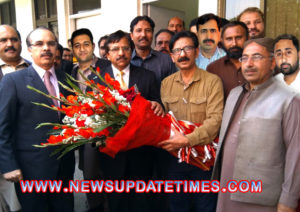 Sarbjit Banur, one of the chief campaigners of the Referendum 2020 from UK giving the message of the legal advisor to SFJ Gurpatwant Singh Pannun said that the SFJ will initiate the registration of votes for Referendum 2020 during next years scheduled 550th birth celebrations at Kartarpur Sahib. Furthermore, a permanent office of SFJ will also be established in Lahore to coordinate the registration of Referendum votes and which will also serve as information center for the Sikhs in Punjab, he said.

He said that the Referendum 2020 Campaign was not act of terrorism or crime as claimed by Indian Governments. Rather, he stressed that the Punjab Independence Referendum 2020 is a peaceful democratic campaign for right to self determination through ballot not bullet”.

He vowed to counter domestically and internationally every move of the Indian authorities to maliciously label the indigenous peoples’ campaigns for right to self determination as terrorism. Referendum2020 is a community financed non-violent secessionist movement and resistance against occupation of Punjab and any attempts to crush Pro Khalistan movement will result in legal consequences at international level.

He mentioned that the SFJ in its London Declaration, had already announced to hold the first ever non-binding referendum among the global Sikh community on the question of secession from India and reestablishing Punjab as an independent country. In November 2020, SFJ announced to hold the polling for referendum the polling will be held in major cities of North America, Europe, Australia, New Zealand, Malaysia, Philippines, Singapore, Kenya and the Middle Eastern Countries and Indian governed Punjab.

General Secretary Pakistan Sikh Gurdwara Parbandhak Committee (PSGPC) Gopal Singh Chawla talking to the media after the celebrations said that they support the Referendum 2020 of SFJ. This initiative is the right of Sikh community of the world and India could not be suppressed the justified demand of SFJ. He further said that the government of Pakistan was supporting the Sikh community and opening of the Kartarpur Sahib corridor was a long awaited demand of the Sikhs fulfilled. He said that government of Pakistan made historic step and Indian government should not step back from it now.