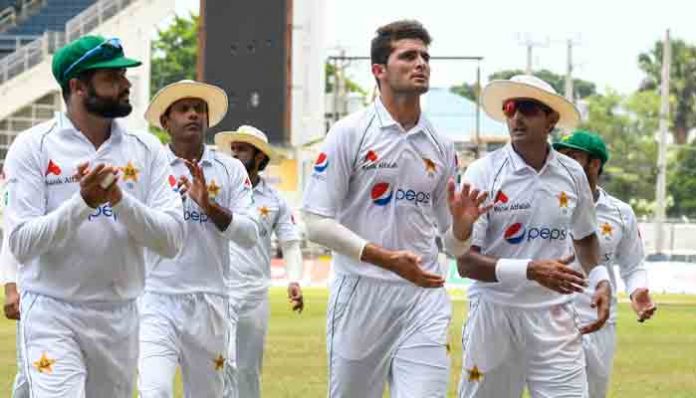 Pakistan’s Shaheen Shah Afridi grabbed career best figures as the tourists dominated with bat and ball on the fourth day of the second and final test against West Indies at Sabina Park  to put themselves on course to square the series.

Shaheen took 6-51 as the visitors bowled West Indies out for 150 shortly after lunch to ensure a 152-run first innings lead and then sped to 176-6 before declaring their second innings, to set the home side a target of 329 to win the test.

West Indies were 49-1 at the close in a test that has already lost a full day to bad weather yet still looks likely to produce a result. Pakistan still need nine wickets while the home side require 280 runs in what would be a record-breaking run chase at the Jamaican venue.

Pakistan, beaten by one wicket in the first test, applied an aggressive approach throughout the day, as West Indies resumed on their overnight score of 39-3, with Shaheen well supported by Mohammad Abbas, who took 3-44. Nkrumah Bonner, who was 18 not out overnight, top scored for the home team with 37.

Pakistan then wasted no time looking to set their hosts an imposing target, changing their batting order to take on the air of a limited overs lineup. Abid Ali came out swinging and helped the tourists race to 70-1 in the 10th over before he was caught in the gully off Alzarri Joseph for 29.

Fellow opener Imran Butt scored 37 off 44 balls and captain Babar Azam chimed in with a quick 33 runs, declaring when he holed out to long-on. Pakistan’s 176 second innings runs came off only 27.2 overs and with a further 138 overs left in the test, they have given themselves ample time to bowl out West Indies and square the series.

Shaheen continued his heroics near the end of the day’s play with a direct throw that ran out Kieran Powell for 23 as the visitors lost the first wicket of their second innings. Captain Kraigg Brathwaite (17 not out) and nightwatchman Alzarri Joseph, fulfilling the role for a second successive day, will resume on Tuesday.