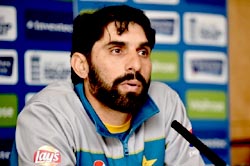 WEB DESK-Melbourne- Pakistan captain Misbah-ul-Haq Friday admitted that after putting a reasonable score on the board in their first innings of the second Test, Pakistan players failed to build any pressure on Australia and conceded defeat.
Australia defeated Pakistan from an innings and 18 runs in the second Test at MCG on Friday. The hosts, who had earlier declared their innings at 624 in reply to Pakistan’s 443 needed 10 wickets in little more than two sessions. Pakistan batting lineup collapsed as they were capitulated for 163 in 53.2 overs to allow Australian snatch the win.
“After getting 443 in the first innings we could not bowl to any discipline and could not build any pressure,” he said in his comments in the post-match ceremony.
Misbah said Pakistan team lost all the momentum but in contrast Australian batsmen performed well to win the match. “Full credit to the Australian batsmen. It’s a funny game, especially when you are under pressure. When you know there can only be a draw or a defeat, then that can create a lot of problems.
“We thought it might be easy if we could get a couple of wickets early. Anything over 100, you never know on the final day. We knew anything could happen,” he added. He however noted that Azhar Ali, Asad Shafiq and Sarfraz Nawaz did well in the match.” Azhar has been outstanding. The ball was doing a lot in the first innings. Seaming and swinging, loads of concentration.
In the second innings, under pressure Asad Shafiq and Sarfraz also played really well. In the end you have to win sessions. You have to play well over both innings. That’s what we haven’t been able to manage. You have to forget such kind of performances and stand-up as a team,” he said.—APP