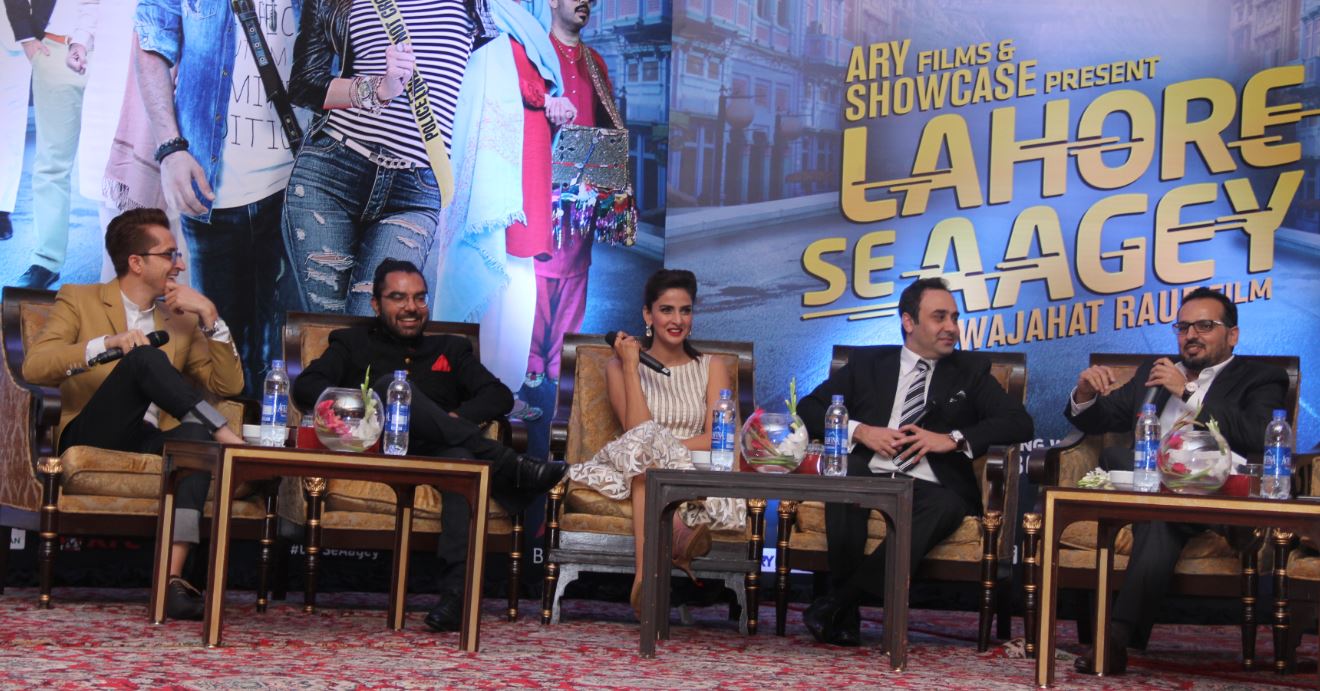 [Karachi] ARY Films and Showcase Films hosted an exclusive media event for their film Lahore Se Aagey, starring Saba Qamar & Yasir Hussain, in Karachi today, officially kicking off the promotions of the film.Lahore Se Aagey, a spinoff of the 2015 hit film Karachi Se Lahore, is directed by Wajahat Rauf and also includes Agha Farhatullah, Mubashir Malik, Rubina Ashraf and Behroze Sabzwari in pivotal roles. The film penned by Yasir Hussain has been shot all over Pakistan from scenic Swat & Kalar Kahar to the spells in cities.Lahore Se Aagey music album includes five tracks, out of which four have been composed by Shiraz Uppal – while Tere Bina, sung by Aashir Wajahat, is composed by Syed Adeel. The main vocals of the album are by Aima Baig, who has sung, Kalabaz (with Jabar Abbas), Be Fiqriyan and Ehl-e-Dil. Zara Si Laga Lo vocals are by Shiraz Uppal himself.“With Lahore Se Aagey, ARY films is bringing another first to Pakistani cinema – a spinoff film – and we are really excited to be a part of this venture which promises to be quality entertainment with great music and an engaging storyline.” said Mr. Salman Iqbal, Executive Producer of Lahore Se Aagey and the Founder and President of ARY Digital Network.“The entire team has put their heart and soul in putting together the music album of Lahore Se Aagey and now just hope these songs are imprinted in the hearts of listeners, since music is a very important part of the film and how the story progresses.” Wajahat Rauf, the producer and director of Lahore Se Aagey, commented.“Lahore Se Aagey, is a complete joy ride that offers the best of Pakistan – from melodious beats, to scenic locations and a script that’s completely our own – the movie is one of the best offerings under the Made in Pakistan umbrella that ARY Films launched less than 10 years ago.” stated Jerjees Seja, CEO ARY Digital Network and co-producer of the movie.“As part of its brand ideology, Bank Alfalah is committed to supporting talent in various areas including film, fashion, sports and innovation. We believe that art and culture play a significant role in a country’s development and image. We are extremely pleased to see the rise of new cinema in Pakistan and have tried to play our part by supporting various projects over the last few years. The decision to support ‘Lahore se Agay’ was, therefore, a natural one. With the aim to discover the potential of Pakistan, the Bank Alfalah Rising Talent platform continues to serve as a practical expression of our corporate philosophy.” shared by Aly Mustansir – CMO, Bank Alfalah. Lahore Se Aagey, a joint production of ARY Films and Showcase Films, is releasing on 11th November 2016 in Pakistan, UAE, UK & USA.

Lahore Se Aagey is an upcoming Pakistani romantic-comedy film directed and produced by Wajahat Rauf and written by Yasir Hussain. It is the sequel to the 2015 comedy film Karachi Se Lahore and is scheduled to release on 11th November 2016 under the production banner of The Showcase Films.

Cinepax Cinemas Reward Card Is Back!