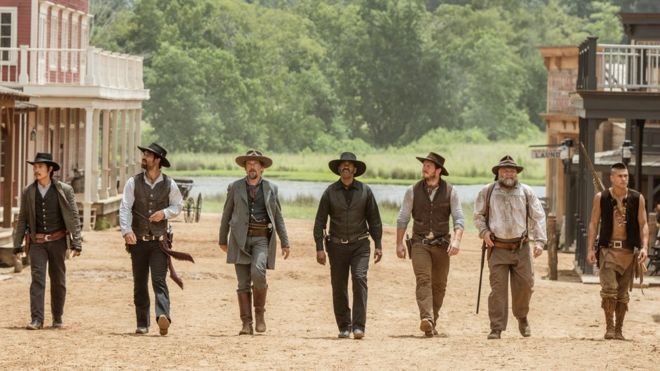 The Magnificent Seven has topped the US box office, taking $35m (£27m) on its opening weekend.

The film, which stars Denzel Washington and Chris Pratt, is a remake of the 1960 western film of the same name.

Its closest competitor was animated children’s movie Storks, which debuted at number two with $21.8m (£16.8m).

The two films knocked Tom Hanks’s Sully, which has been top of the box office for the last two weeks, down to number three.
‘Consistency and quality’

Bridget Jones’s Baby, which sees Renee Zellweger reprise her lead role in the third film in the franchise, was placed fourth with $4.5m (£3.5m).

Washington and Hanks ranked as the overwhelming reason audiences went to see The Magnificent Seven and Sully respectively, according to data gathered by comScore, which compiles the figures.

“These are guys who can draw a huge audience in any type of movie that they’re in. It’s not like they’re pigeonholed into one kind of franchise.

“Denzel Washington can be part of a genre, the western, that doesn’t exactly have teenagers scrambling to the movie theatre.”

Lollywood suffered huge financial loss due to fake case against me:...