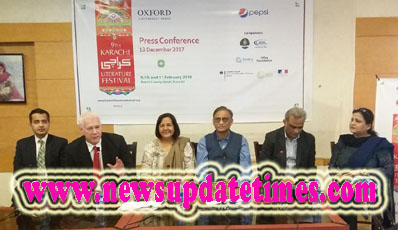 Lahore  –  The ninth Karachi Literature Festival (KLF) will be held on 9, 10, and 11 February 2018 at the Beach Luxury Hotel, Karachi. KLF brings together and celebrates Pakistani and international authors writing in diverse languages. The festival will feature talks, panel discussions, readings, book launches, English and Urdu mushaira, satire, author signings, performing arts, film screenings, book fair, literary awards, and a food court. This was announced by Ameena Saiyid OBE, Managing Director, Oxford University Press (OUP), and Founder/Director, Karachi and Islamabad Literature Festivals, and Co-founder, Children’s Literature Festival, at a press conference at the Arts Council. Around 131 Pakistani and 30 international authors and speakers from nine countries will participate in the upcoming KLF. Around 19 book launches and more than 60 sessions are planned for the festival.

Ameena Saiyid gave an overview of the four prizes instituted by KLF in collaboration with corporate entities and foreign missions. These annual prizes are awarded to books in the categories of fiction, non-fiction, peace, and Urdu. The books are assessed by panels of juries comprising Pakistani academics, critics, and writers. This year the prizes include KLF-Pepsi Non-Fiction Prize, KLF-Getz Pharma Fiction Prize, KLF Peace Prize (Consulate General of Germany), and KLF-Infaq Foundation Urdu Literature Prize.

The KLF-Pepsi Non-Fiction Prize of Rs 250,000 goes to the best non-fiction book originally written in English by a Pakistani or Pakistan-origin foreign national. The books long listed for this prize include Lahore in the Time of Raj by Ian Talbot and Tahir Kamran, How Pakistan Got Divided by Rao Farman Ali Khan, A History of the Judiciary by Hamid Khan, Urban Traditions and Historic Environments in Sindh by Anila Naeem, Imagining Pakistan by Rasul Bakhsh Rais, and Honour Unmasked by Nafisa Shah.

The KLF-Getz Pharma Fiction Prize goes to the best fiction written originally in English. The author (a Pakistani or a Pakistani-origin foreign national) of the best novel or short story collection will be awarded Rs 300,000. The long list of books announced for this prize includes The Golden Legend by Nadeem Aslam, Exit West by Mohsin Hamid, The Party Worker by Omar Shahid Hamid, This House of Clay and Water by Faiqa Mansab, Daddy’s Boy by Shandana Minhas, Boy of Fire and Earth by Sami Shah, Snuffing out the Moon by Osama Siddique, and Home Fire by Kamila Shamsie.

The KLF Peace Prize of 3000 euros is a joint project of Consulate General of Germany in Karachi and the Karachi Literature Festival. It awards a fiction or non-fiction book that promotes peace, tolerance, and international understanding, written by a Pakistani or a Pakistani-origin foreign national, or any foreign national residing in Pakistan. The books long listed for the Peace Prize are Love in Chakiwara and Other Misadventures by Muhammad Khalid Akhtar, Prison Narratives by Akhtar Baloch, Indus Waters Treaty: Political and Legal Dimensions by Ijaz Hussain, This House of Clay and Water by Faiqa Mansab; and Imagining Pakistan by Rasul Bakhsh Rais, and Islamophobia and Securitization by Tania Saeed.

The KLF-Infaq Foundation Urdu Literature Prize goes to the best book in Urdu. The prize of Rs 200,000 will be given to a book of prose or poetry. The long-listed books include Deed wa Deed by Altaf Fatima, Neeli Baar by Tahira Iqbal, Rail ki Seeti by Muhammad Hasan Mairaaj, Qila e Faramoshi by Fahmida Riaz, Urdu Hindi Tanazi’a aur Punjabi Zabaan by Naveed Shahzad, and Aatey Hai Ghaib Sey by Anwar Sha’oor.

“The annual Karachi Literature Festival is about the promotion of reading, writing, and authors, and of bringing enrichment to people’s minds. With participants and visitors from all over the country, this is truly an all-Pakistan event. More so, with participants from different countries around the world, it is truly an international event. As always the entry to the event will be free,” said Asif Farrukhi, Co-founder of the Karachi Literature Festival.