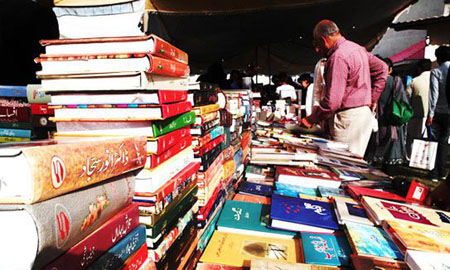 KARACHI –  Last day of Karachi Literature Festival (KLF) started off with a video competition ‘Making Change in Pakistan: What Works, and What doesn’t’ where the judges were Sarmad Khoosat, Nadeem F Paracha and Parvez Hoodbhoy.

In the session, ‘Celebrating Faiz’, Adeel Hashmi took the opportunity to recite poetry to pay homage to his grandfather and master poet Faiz Ahmed Faiz.

Sharing her views on how simple Faiz was, Zehra recalled, “He was very patient and was known as a man of peace. He never even complained about his imprisonment or loneliness”.

The session, ‘The Future of Pakistan’s Creative’s: Film, Fashion, and Music’, was led by dynamic and charismatic women of our Industry, including Mansha Pasha, Pakistani drama artist Maheen Karim, a fashion designer and none other than Zeb Bangash, who has touched the souls of many people across the globe with her voice. The session included the discussion about the evolution of Pakistani film industry and the panelists also highlighted the issue of women empowerment in our society and that the only purpose of the existence of woman was not to get married; there was more to it.

The concluding session, held on the theme: Partition and 70 years of Independence: The Birth of Two Nations or the Birth of Two States, started with a question posed by Harris Khaliq, who asked, was partition a birth of two nations?

He clarified that the very reason why he was asking this question was that this even conflicted with the notion of Two Nation Theory?

In response to this opening question, Professor Ayesha Jalal said, “In this case, the idea of Muslim nationalism was raised on behalf of all Indian Muslims but this Pakistani homeland, the homeland that was created did not include all the Muslims of India. Hindu and Muslims got distorted in that prism of partition and ended up in two nation states: India and Pakistan, which split the Muslims between these two entities.”

The session concluded when all the panelists agreed that the partition gave birth to two states rather than two nations.

In order to further stress the point, Hassan Sayyed Hassan said that “Partition was rather a birth of three nations; not to forget the fall of Bangladesh.

Robert Long commented, “Jinnah kept the definition of Pakistan vague and it came to mean different things to many people.”

On the last day of KLF 11 books were launched, including Dear Heart: To Faiz in Prison, 1951-1955 and Over My Shoulder  by Alys Faiz, Daddy’s Boy by Shandana Minhas, Fasana Raqam Arain by Mujahid Barelvi, Love in Chakiwara and Other Misadventures by Bilal Tanweer, Those Children by Shahbano Bilgrami, Ajmer Sharif: Awakening of Sufism in South Asia by Reema Abbasi,  The Pakistan Anti-Hero: History of Pakistani Nationalism through the Lives of Iconoclasts by Nadeem F Paracha, Interpreting Islam, Modernity, and Women’s Rights in Pakistan by Anita M Weiss, Hybrid Tapestries: The Development of Pakistani Literature in English by Muneeza Shamsie and Hindustan ki Mauseequi by Abdul Halim Sharar.

‘Partition: Drawing Borders in Blood’, the story that how a family that was separated during the times of partition and its aftermath and was reunited because of the publication of the book by Ishtiaq Ahmed called the Punjab Bloodied, Partitioned, and Cleansed was narrated.

Harbhajan Kaur’s/Shehnaz Begum, the lady whose son Rizwan from whom she was separated, both were present at the session and were introduced to the audience.

On a lighter side, viral sensation Syed Shafaat Ali engaged the audience in the main garden with his witty jests.

Ameena Sayyed Managing Director, Oxford University Press and Director Literature Festivals, in her closing remarks, thanked everyone for contributing to the success of this event.

She specifically thanked all the speakers and performers who set the underlying theme of the festival.

“Whether you have travelled all the way from Italy, France, Germany, Switzerland, Bangladesh, the UK, US, India or Maldives, or other parts of Pakistan; or you have commuted from somewhere within Karachi: thank you for being here to inspire and enlighten all of us,” she said.

“This is not the end but the beginning of another wonderful adventure,” she said, and added, “The preparations are on for the next Islamabad Literature Festival to be held on 14, 15, and 16 April 2017 and the Karachi Literature Festival London, in partnership with Bloomsbury Pakistan and Southbank Centre London on 20 May 2017.”

She further said that KLF London will offer a unique and inclusive experience at a mainstream venue. “We plan to celebrate Pakistan’s 70 years of existence and complex history and culture through its literature and arts,” she added.

8thKlf ended on as remarkable classical dance performance by Shayma Sayyed and Suhaee Abro, a concert by Saif Samejo and dhamaal by Sufi group.

Fashion Gives Back! The Fundraisers’ Bargain Basement Sale 2021 is set...