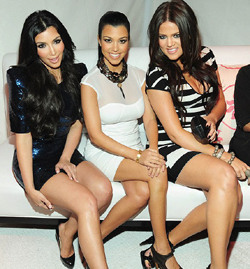 WEB DESK – LOS ANGELES – Kim Kardashian West felt left out when her sisters all showed up for a family meeting wearing heat-to-toe burgundy.

The 36-year-old reality star thought her siblings Khloe and Kourtney Kardashian looked very ‘’in your face’’ when they turned up to a family meeting in head-to-toe burgundy, while she wore an oversized flannel shirt with lace-up leather pants.

And the ‘Keeping Up With the Kardashians’ star was left feeling even worse when her younger half-sister Kylie Jenner, 19, donned a burgundy ensemble of her own for the meeting.

On her way to connect with her siblings, Kylie revealed on Snapchat: ‘’So Kim just snapchatted how annoying it was that Khloe and Kourtney both showed up in burgundy on accident, so I’m about to show up to the same meeting in all burgundy head to toe.’’

And as she walked through the door, Kim – who has kids North, three, and Saint, 13 months, with husband Kanye West – moaned: ‘’I feel so left out!’’

Khloe, 32, later shared a photo on Instagram of herself, Kourtney, 37, and Kylie, with the caption: ‘’Burgundy babies’’. Meanwhile, Kim has topped the list of stars who women believe take the best selfie, beating Kylie and her other sibling Kendall Jenner – who missed the family meeting as she’s in Paris – into second and third place respectively.

According to a new report which found that selfies will transition from frivolous fad to technological phenomenon in the not too distant future, especially with advanced front camera technology in smartphones like the XperiaTM XZ, 1 in 10 women believe Kim takes the best self-posed picture. Rounding out the top five were Rihanna and Katy Perry.