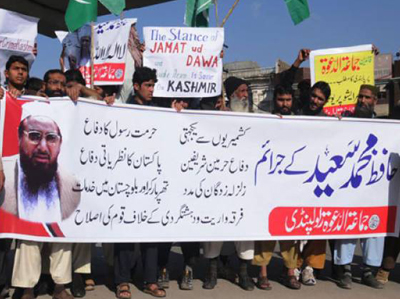 WEB DESK – LAHORE/Rawalpindi – The Jamaat-ud-Dawa has launched a countrywide campaign against the detention of its chief, saying it will continue till the release of Hafiz Saeed.

As a part of its two-pronged policy to mount pressure on the government to review its decision, the party is also holding consultation with lawyers to challenge the house-arrest order in a court of law.

According to an office-bearer of JuD, a petition is expected to be moved in the Lahore High Court either today or tomorrow (Thursday).

“We are holding consultations with lawyers and hopefully challenge the detention of Hafiz Sahib in the court today or tomorrow,” a JuD leader told The Nation. He said the Dawa leadership had also discussed the matter with leading religious and political parties who backed the decision.

The JuD chief is under house-arrest in his Johar Town (Lahore) residence where a heavy contingent of police has been deployed to control any untoward situation as protests by his followers were started soon after his detention and continued in different cities on Tuesday. He was taken into custody from JuD head quarters, Jamia Qaadsia on Monday midnight and shifted him to his house in Johar Town. Hafiz Saeed’s personal guards were also present at both the places (Johar Town house and Jamia Qadsia), making first layer of his security.

A statement issued by JuD headquarters said the protests were held against detention of Hafiz Saeed in Islamabad, Karachi, Lahore, Peshawar, Quetta, Sialkot, Gujranwala, Faisalabad, Hyderabad and other cities, which were attended by thousands of people from different walks of life.

In Lahore, hundreds of JuD workers, led by Hafiz Abdur Rehman Makki (a central leader of the party) held a protest in front of the Punjab Assembly. Holding placards and banners inscribed with slogans “Hafiz Saaed’s destination – freedom of Kashmir and destruction of India” and “The fear of Hafiz Saaed prevails on Indian Premier Modi,” the protestors chanted full throat slogans against the government decision and India. The protesters warned to bring more intensity in agitation if the government did not withdraw its decision.

Addressing the protesters, Makki said Hafiz Saeed was detained on India’s pressure which is bent upon crushing the freedom movement in Occupied Kashmir. He demanded immediate release of the JuD chief, which, he said, was the voice of the nation.

Some members of the Punjab Assembly, led by Jamaat-e-Islami Punjab chapter chief Dr Waseem Akhtar, also held a symbolic walkout from the house proceedings in protest against Hafiz Saeed’s detention. Earlier, speaking on a point of order, Dr Waseem demanded immediate release of the JuD chief, saying the government’s decision was unjustified and illegal.

Opposition leader in the assembly, Mian Mehmoodur Rasheed, also walked out of the assembly with Dr Waseem.

JuD’s central spokesperson, Yahya Mujahid, in a separate statement, condemned detention and linked it to India’s pressure. He said there was no case against Hafiz Saeed and the move reflected the government’s helplessness before India and America’s pressure.

“The government put the ban on Hafiz Saeed’s movement just to please India, but our support for Kashmiri brothers will continue,” he said.

As February 5 is being marked as Kashmir Solidarity Day in Pakistan, Yahya said JuD would hold countrywide protest on the day to express solidarity with the people of occupied valley. He said different programmes and rallies had already been planned by the party in connection with the event. Similarly, he said, Falah-e-Insaniyat Foundation (JuD’s charity organisation) would also continue its welfare projects across the country.

In Rawalpindi, JuD registered its strong protest against the government. The protesters demanded immediate release of Hafiz Saeed.

A large number of JuD activists, led by Rawalpindi chief Abdul Rehman, gathered at Liaquat Bagh outside Rescue 15 office and demonstrated against the government for putting Hafiz Saeed, JuD chief, under house arrest in Lahore. Besides chanting slogans, the protesters also burnt tyres in the middle of the road and blocked the vehicular movement.

Addressing the protesters, Hafiz Abdul Rehman, the JuD Pindi chief said the confinement of Saeed was tantamount to take U-turn on core issue of Kashmir. He said the government was dancing on the tunes of Trump and other enemies of Pakistan and had confined Saeed.

He asked the government to release Dawa chief or else they would expand the protest. During the entire episode, traffic remained blocked on Murree Road and its linking roads.