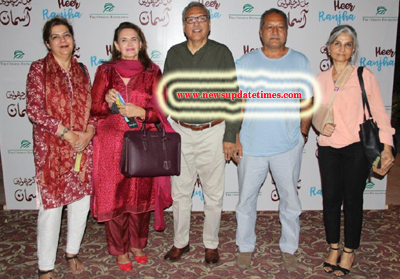 Karachi – The Citizens Foundation (TCF) in collaboration with Zain Ahmed presents ‘Heer Ranjha’, an Urdu Musical featuring fine actors like Sanam Saeed (Heer), Arshad Mahmood (Heer’s father) and Samina Ahmed (Heer’s mother). The play celebrates romantic love entwined with beautiful poetic verses and at the same time will raise funds for educating the less-privileged children of Pakistan. The stage theatre is currently being performed in Karachi and will be followed by Lahore and Faisalabad.

Inspired by Waris Shah’s poetry and based on the evergreen script of Kaifi Azmi, play is being directed by Zain Ahmed, currently the Artistic Director of the NAPA Repertory and Festival Director of the NAPA International Theatre and Music Festival. Audience will be able to enjoy live singing by Sanam Saeed, Hasan Raza (Ranjha) and the rest of the cast. The songs from the Bollywood movie Heer Ranjha (1970) have been redone with contemporary music under the able music direction of Nigel Bobby.

“Heer Ranjha has been presented on stage and in cinema many times before so the expectations are really high. I wanted to present this love story with a twist and create a beautiful harmony in the new and old. That’s when I decided to base the story on Kaifi Azmi’s script and contemporize the songs from Bollywood Punjabi movie Heer Ranjha. My entire cast has given their blood, sweat and tears to perform this Urdu Musical and I hope the audience will enjoy watching our performance,” said Zain Ahmed, Director.

He added, “The play is also an effort to help the cause of education as all proceeds from this play will go to TCF. We chose TCF because they are a leading name in the social sector and are literally transforming the lives of the deserving children by giving them the gift of education,” said Zain Ahmed, Director.

Heer Ranjha is a story of undying love that many still quote and look up to. It’s an age old tale of the star-crossed lovers, Heer who belongs to Jhang and Ranjha who belongs to Takht Hazara. Upon a chance meeting, Ranjha falls in love with Heer at first sight. He is enraptured by her beauty and charms. Heer is also attracted to him but is disappointed when she discovers that their families have been enemies for generations. However, these lovers vow to fight for their love. Who wins this war of love and egos remains to be seen.

“TCF is grateful to Zain and his team for taking up this great task of bringing Heer Ranjha to the theatre as an Urdu musical. The fact that this team is contributing to the cause of education giving their talent and time to help more deserving children go to school, is commendable. We are so happy that they have become part of the TCF movement and are playing their part in making education a reality for those who have little chance of having access to quality education otherwise. The supporters of TCF have taken great care in organizing this show and bringing it to the audience in the best possible way,” said TCF’s CEO, Syed Asaad Ayub Ahmad.

Heer Ranjha – the Urdu musical will be performed in Karachi from 7-11 September, Lahore from 13-14 September and Faisalabad from 16-17 September. For the Karachi show, the tickets are available at Neco’s Bukhari, Neco’s Dolmen Mall – Clifton and Agha’s. For more information and ticket details for Lahore and Faisalabad, please visit TCF’s Facebook page: www.facebook.com/TCF.Pak. Tickets can also be purchased online from www.bookitnow.pk