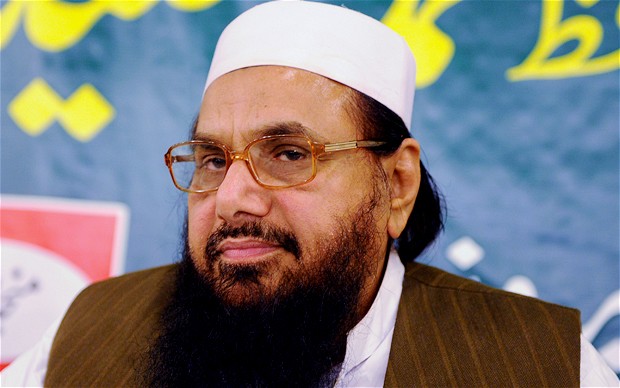 The police action comes just a day after his organisations, JuD and its charity wing Falah-e-Insaniyat Foundation, were put on the terror watch-list by the interior ministry.

Defying the detention orders, Saeed talked to media outside the mosque and told reporters he had received the confinement orders – calling it an international conspiracy. He alleged the Pakistan government was doing the bidding of India at the behest of the US to stifle Kashmir freedom movement.

In yet another act of defiance, he asked JuD activists to gather in large numbers in streets on February 5, to observe Kashmir Solidarity Day.

“I have received the (detention) orders of the government of Pakistan. I believe this is not against me but is an attempt to sabotage the freedom movement of Kashmir. This (action) is part of the international conspiracy. The government is helpless before the pressure of Trump and Modi,” Saeed said while referring to US president and Indian prime minister. “(It’s on) Modi’s insistence and Trump’s instigation.”

The provincial government yesterday declared the Johar Town residence of Hafiz Saeed as sub-jail where he would remain confined at least for six months.

The house arrest comes as US warned Pakistan to act against Saeed or face sanctions.

Hundreds of JuD workers gathered at the JuD secretariat as police contingents arrived to detain their leader. They were seen in trouble as they were strolling on the bumpy roads outside the JuD offices near Chauburgi.

Earlier, Punjab government issued a notification, under Section 3 of the Prisons Act 1894, declaring “House No 116 E, Johar Town, Lahore, a sub-jail for the confinement of Hafiz Muhammad Saeed… with immediate effect”.

A notification issued by federal interior ministry showed that he has been detained under Section 11-EEE(1) of the Anti-Terrorism Act, 1977.

Hundreds of Saeed’s foot-soldiers chanted full throat slogans as he appeared from the mosque complex along with police officers to talk to media crews. Later, he was shifted to his house on four-wheel-drives with heavy police contingents escorting his convoy of land cruisers.

At the press talk, the JuD chief regretted his arrest and said that it was “trial” for his followers and the organisation.

“If they think that by putting restrictions on us they can put the Kashmir issue on backburner, (they are wrong as) this is impossible.”

Saeed said he and his origination were not causing any trouble inside Pakistan.

“Respectable interior minister (Nisar Ali Khan), I challenge you to show us if there is even a single FIR registered against us anywhere in Pakistan. Our only crime is that we support Kashmir freedom struggle.

“Modi, we will not leave you. This movement (of Kashmir) will continue till the independence of Kashmir,” the JuD chief said.

Though he asked his workers to gather on streets on February 5, he urged them to stay cool and calm. “This is once again our trial. Soon we will be cleared with honour. This is not happening for the first time,” he said.

Hafiz Saeed was put under house arrest after the Mumbai attack but was released about six month later in June 2009.

His followers were chanting full throat slogans when Saeed was escorted to a land cruiser after concluding the press talk, to be taken to his Johar Town residence. Several other JuD leaders were also part of the convoy.

The activists were chanting, “Allah is Great. Hafiz tera ek Ishara, hazir hazir Laho hamara (Hafiz we will shed our blood even at your single gesture). Look Modi, who has come? Lion has come, lion has come!”

Hafiz Saeed was present at the al-Qaadsia Mosque located near Chauburji Chowk of Lahore when police contingents and other law-enforcing agencies reached there and surrounded the premises.

Media crews were seen impatiently waiting for the Jud leader outside the mosque complex. The JuD workers allowed entry to the reporters inside the headquarters after proper body search. On this occasion, hundreds of bearded youth were seen roaming around the premises.

When asked if it is legal to hold a press talk after someone had received detention orders, a police officer requesting anonymity said it was totally illegal and the JuD should not have been allowed to speak to press.

Earlier, some police officers held a series of negotiations with the JuD leader and asked him to cooperate with them. The JuD chief asked the officers to show him the warrants first. At least two hours later, a senior police officer reached there and handed over the government’s orders to Saeed.

The JuD activists asked media persons to come inside apparently after Hafiz Saeed agreed to accept the official orders on the condition that he will be allowed to talk to the media.

Many supporters of Saeed were seen shaken and disappointed over the development.

“We are saddened over this. Hafiz Sahib is detained on the orders of US and India. We shall resist the action and will continue what we have been doing in the past,” said 35-year-old Omar Asghar, who has been working in the JuD for last 20 years.

A teenage foot-soldier, Zeeshan said this was totally wrong to detain their leader. “Hafiz Sahib is patriotic Pakistani. If this is being done in the national interest, we offer our lives. But if it is being done to please the US and India, we will resist,” he said in an emotional tone.

“We are not worried. This is not for the first time. We have experienced many such trials in the past,” another worker Riaz said. “We will continue our struggle till the freedom of Kashmir,” he said. “This government’s action cannot stop our movement.”