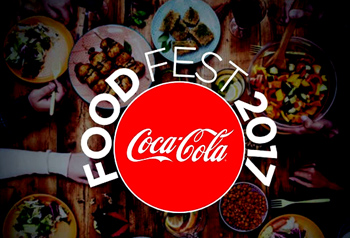 LAHORE – The second day of Lahore’s biggest food festival CokeFoodFest attracted over 10,000 visitors to sample the city’s culinary delights. Attendees witnessed chefs working their magic through cooking demonstrations and enjoyed live music featuring performances by byQuadrum The Percussionists, Sonu Dangerous and Arsalan Hassan along with various other fun-filled activities for the entire family.

CokeFoodFest promises to offer all of the season’s freshest flavors ranging from a diversity of traditional Desi to Continental, Asian (Chinese, Japanese, Thai), Turkish/Lebanese and Italian.

The selection of cuisines for CokeFoodFest has been done based on the reviews and feedback of the highly active members of the food portal“Foodies .hence confirming that the selection is based on popular choice and opinions of Lahore’s most passionate foodies. The deliciously anticipated weekend won’t stop there as visitors will be able to taste the many culinary delights on offer cooked and supplied by local restaurateurs and chefs from all corners of Lahore. The CokeFoodFest also acknowledges that there is nothing quite like a home cooked meal; for which reason the festival celebrates home based chefs who make up a significant part of the CokeFoodFest, bringing a range of their multi-generational secret family recipes, soul food and unique flavors to all of Lahore.