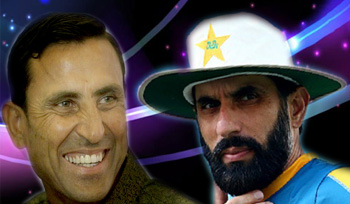 Web Desk – Dominica bid farewell to two legends of the game in a most fitting manner, giving Younis Khan and Misbah-ul-Haq the most heart-stopping send-off possible

History beckoned time and again, torturing and teasing them. It made them wait, it made them wonder, it made them despair. But, with six balls left in the game, the series, and their careers, came perhaps its most satisfying moment.

Shannon Gabriel, West Indies’ No. 11, had spent just over half an hour at the crease, and had seen out 21 balls. See out one more, and it would leave Roston Chase, who was batting on 101, to face the last over and dramatically raise West Indies’ chances of saving the Test. Gabriel had kept out those 21 balls by trusting his defence, but now, seeing Yasir Shah toss one up outside off stump with all nine fielders in catching positions, went for a big slog.

He only managed an inside-edge into the stumps. It’s hard to say what Gabriel was thinking. It’s hard to imagine what must have gone through Chase’s mind. Pakistan, nonetheless, had made history.

This side – Misbah’s side – had done what Hanif Mohammad couldn’t do, what Javed Miandad couldn’t do, what Imran Khan couldn’t do. He had led his side to its first ever series victory in the Caribbean, a 101-run win sealing his – and Younis’ – careers with aplomb. Test cricket certainly has a way of rewarding its own.

Pakistan looked like they would make short work of the final session when session when, three overs in, Hasan Ali brought an end to Jason Holder’s obdurate resistance. It left West Indies seven down with only the tail to give Roston Chase company.

With the pitch playing extremely slowly, what Hasan did to dismiss him might even have been an intentional ploy. He took the surface out of the equation, hurling a fierce inswinger that made a beeline for leg stump on the full. Holder made a mess of trying to keep it out, and was plumb in front.

But just as Pakistan began to envisage victory, Bishoo and Chase had designs on a grand resistance. They split the work brilliantly, with Bishoo keeping out Yasir Shah and Chase negotiating the faster bowlers, and Pakistan struggled to break that pattern. Ultimately Misbah resorted to pace from both ends, and Bishoo’s discomfort against the seamers eventually cost him his wicket, as he fended a Mohammad Abbas bouncer to silly point.

Chase had been sensational all series, and it would be churlish to take any credit away from him. But he led a charmed life in the last session and you couldn’t help wondering if he was destined to save the game. On two occasions, Hasan Ali dropped him off his own bowling, and when Abbas had him caught in the slips, replays showed he had just overstepped. When Chase drove Mohammad Amir down the ground for an exquisite boundary to bring up his hundred, you could sense the stadium felt it too.

Whenever a wicket fell, there was a sense that the resistance had finally ended. But Alzarri Joseph picked up from where Bishoo left off, and then Gabriel took over from Joseph. Between them, West Indies’ Nos. 9, 10 and 11 spent 99 balls at the crease, while scoring 12 runs. Runs had simply ceased to matter by then.