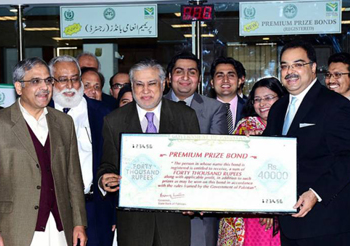 ISLAMABAD –  The government on otherday launched first-ever registered premium prize bond of Rs40,000, which would give profit after every six months besides carries first prize of Rs80 million.

“Individuals and public and private companies could buy this bond. However, the banks could not purchase it,” said Finance Minister Senator Ishaq Dar at launching ceremony of the premium prize bond. He said the dual-features of the bond which offer both prize money as well as bi-annual profit, would be very attractive for investors and customers.

The minister said the premium prize bond will also contribute to the efforts for documentation of the economy. He said that the bond is free from the threats of being lost, stolen and damaged because it will be registered in the name of the investor as it can be re-issued, if lost or damaged.

He further informed that there would be no limit and period of the investment in bond.

He said the bond prize will be directly transferred in the account of the winner instead of publishing his name in the newspaper.

The minister announced that the government would soon launch another bond of Rs100,000. He said that saving to GDP is currently around 15 percent, which, he said, should be around 21 percent to achieve higher growth.

“Pakistan this month will sign an agreement with Switzerland for exchange of information on tax evaded money,” he said and added that Pakistan has also became the member of the Organisation for Economic Co-operation and Development (OECD) and it is now included in the list of 104 member countries. These measures will help in the drive against tax evasion, he added.

Dar said that Pakistan’s economic progress is globally acclaimed due to the improvement in macroeconomic indicators. International economic experts see Pakistan among the top 20 economies of the world by 2030, he added.

Talking about country’s debt, the minister said that debt to the GDP is currently around 60.2 percent of the GDP, the same level was in 2013 when the incumbent government took charge.

He clarified that Pakistan’s debt to GDP is still low as compared to the other countries including the United States and China.

He said that economic situation of the country had improved due to the economic policies adopted by the PML-N government according to its election manifesto.

He said that economic landscape of the country has changed as compared the economic conditions of one year back, adding that Pakistan Stock Exchange (PSX) has been included in five big stock exchanges of the world.

Dar said that some elements were spreading baseless propaganda about the national economy and public debt. No one would be allowed to take political advantage on national economy, he added. He appreciated the endeavours of National Savings (CDNS) for coming up with such innovative product for the first time in Pakistan.

On the occasion, CDNS Director General Zafar Masud explained the key features of the new product and said that a centralised mechanism has been developed at the State Bank of Pakistan Banking Services Corporation (“BSCs”) counters through which the profit and prize money won will be credited in the attached bank account of the investors, making the investor free from hassle of claiming prize amount.